Regarding Australia's reputation following the ball-tampering saga, Lehmann felt a balance needed to be struck between aggression and gamesmanship.

Former Australia batsman and coach Darren Lehmann believes that the national cricket team, in the absence of batting heavyweights Steve Smith and David Warner, will make a good account of themselves against India and Sri Lanka over the home summer.

Top-ranked India, led by Virat Kohli, and Sri Lanka are due to visit Australia for Tests either side of the new year and with Smith and Warner serving 12 month suspensions for their roles in the ball-tampering controversy that erupted during the Newlands Test match in March, there has been much talk of how the hosts will struggle. Australia lost the Test series to South Africa and were whitewashed 5-0 by England in a recent ODI series.

Lehmann, however, backed the depth in the Australian ranks.

“A lot of people are writing us off in Australia. I m not. We re going to be OK,” he told Macquarie Sports Radio. “Obviously, Warner and Smith are great players, they ve made a lot of runs for Australia over their careers, and [Cameron] Bancroft was starting to come good in the last series. You re going to miss those players and when they re back they re certainly going to have an effect on the team and results because they ll play well. But our depth, it just gives another player an opportunity, a young kid coming through.

“The bowling is never going to be an issue. When you ve got Starc, Hazlewood, Cummins, Lyon, Pattinson, you re 20 wickets aren t going to be an issue, and that s the first thing you need for Test match cricket, he said. “You ve just got to keep them (fast bowlers) on the park fit and playing. And runs in Australia, I think we ll bat quite well in Australia. I think we ll bat OK. The conditions suit the way we play and bat and the young guys will stand up.”

On March 29, after the ball-tampering controversy, Lehmann had announced that he would stand down as Australia s coach after the final Test against South Africa. Since then, Justin Langer has taken over and made some strong comments on Australia s cricket culture, which many in the country had feared had been badly tarnished following Smith, Warner and Bancroft s suspensions.

Lehmann felt a balance needed to be struck between aggression and gamesmanship.

“It will certainly help win the fans back over, and that s important because we want kids playing the great game of cricket, but you also need to win, win a certain way, he said, while referencing the way New Zealand have played their cricket over the past several years.

That s a fine balance, because as Australians we want to see the Australian cricket team winning I do, I m a fan now sitting on this side. I want to see them win, play well, play fair. Yes, have some fun and play with a smile on your face but you ve still got to have that right balance and that s the real tricky art Justin and Tim [Paine] are going to face this summer.” 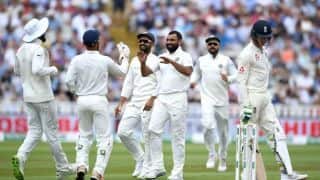