Match was called off due to bad light.

Wicketkeeper-batswoman Sarah Taylor scored an unbeaten 30 as England were 110 for six at the end of Day Two of the one-off Test between England Women and India at Wormsley.

Jenny Gunn was not out along with Sarah. Jenny was unbeaten on 2. Play was called off for the day due to bad light, after halted the proceedings for some time.

Jhulan Goswami and Ekta Bisht picked up two wickets. However, the match saw a record number of 16 leg-before dismissals.

India were all out for 114, after taking a lead of 22 runs. England soon came out to bat and lost Heather Knight with the second ball, as Jhulan Goswami removed her. She was caught behind by Karu Jain.

Lauren Winfield and Tammy Beaumont was going strong, but soon the latter was dismissed by Ekta Bisht. Charlotte Edwards and Lauren then put up a good show. Just when Lauren was looking fine, she was trapped leg-before by Shikha Pandey. As soon as Sarah Taylor came out to bat, it started raining and early tea was taken. The match was disrupted by rain for a long time.

At around 5:15 local time, the inspection happened and play was resume 15 minutes later.

Nagarajan Niranjana, who picked up four wickets on Day One, was the top scorer for India in the first innings with 27. More rain is expected tomorrow. Saeed Ajmal will be cleared by ICC for suspect bowling action, says Misbah-ul-Haq 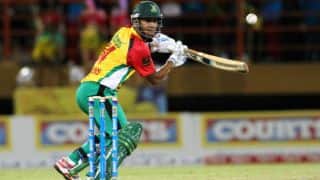