Sarfaraz Khan could not control his emotions after reaching yet another century this season in the Ranji Trophy final against Madhya Pradesh in Bengaluru.

Bengaluru: Sarfaraz Khan’s run-making juggernaut continued with his fourth century of the ongoing Ranji Trophy season, taking Mumbai to 351/8 in 122 overs at lunch on day two of the final against Madhya Pradesh at the M. Chinnaswamy Stadium on Thursday.

After being watchful on day one, Sarfaraz stood firm on day two and was rewarded for his perseverance with an unbeaten 119, which also marked the second time he crossed the 900+ runs mark in a Ranji Trophy season after amassing 928 runs in 2019/20 season, becoming just the third batter after Ajay Sharma and Wasim Jaffer to do so.

To break the door for an India selection one needs to hammer the door with runs and more runs. #sarfarazkhan is doing just that. His performances for @MumbaiCricAssoc are inspirational for anyone who aspires for more. Well done!

Sarfaraz Khan in this Ranji trophy 2022:-

#sarfarazkhan has the ability to be the next wicket-keeper batting sensation of #IndianCricketTeam !!

Just keep up this consistency man. You have the ability to surpass Pant even.

Sarfaraz continued to nail his sweep against Kartikeya while timing his straight-down-the-ground drives. Though Gaurav took out Tanush Kotian’s off-stump with a peach of a delivery and Dhawal Kulkarni nicked to the keeper off Anubhav Agarwal, Sarfaraz continued to march forward despite having a nasty collision with Gaurav. He even brought out the ramp shot against Anubhav, with the ball going over the keeper and slips for a cheeky boundary.

Sarfaraz then reached his century in 190 balls by driving Kartikeya down the ground to complete a superb knock under pressure. His celebrations on reaching the three-figure mark ranged from being teary-eyed and punching the air in delight to bringing out the kabaddi thigh-five, met with thunderous cheers from the Mumbai camp and a limited number of spectators in the stadium.

This has been a superb knock in the all-important summit clash. ? ? #Final | #MPvMUM | @MumbaiCricAssoc

After reaching the century, Sarfaraz continued to attack Kartikeya, slog-sweeping him for a six-over deep mid-wicket and was followed by Tushar Deshpande slamming a boundary down the ground as Mumbai fetched 103 runs in the session.

Madhya Pradesh was finally able to dismiss Sarfaraz Khan on 134 as Mumbai were bowled out for 374 in the second session of play on Day 2 of the Ranji Trophy final. 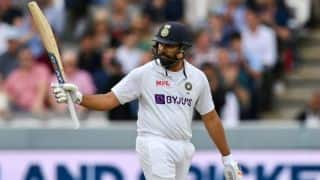 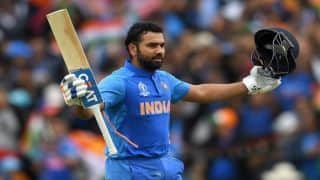