Sarfraz slammed former pacer Shoaib Akhtar for his comments, stating that Akhtar s opinion was not criticism, but was a personal attack on him.

Pakistan captain Sarfraz Ahmed, who was banned for four matches by the ICC for his racial slur on South African allrounder Andile Phehlukwayo during the second ODI between Pakistan and South Africa in Durban last week, has slammed former Pakistan pacer Shoaib Akhtar for his comments on Sarfraz, stating that Akhtar s opinion was not criticism, but was a personal attack on him. (ALSO READ: Pakistan captain Sarfraz Ahmed vows to return an improved man)

Sarfraz was greeted at the Karachi airport by some fans, who held placards condemning the ICC s decision. Speaking to Geo TV, Sarfraz said, He [Shoaib Akhtar] is attacking me personally not criticising. (ALSO READ: Akram lashes out at PCB for calling Sarfraz back home from South Africa)

Earlier, Akhar via a video posted on social media had stated, This [Sarfraz incident] is not acceptable as a Pakistani. In my opinion he [Sarfraz] did this in the heat of the moment. I think he should apologize publically. (ALSO READ: Sarfraz Nawaz criticises PCB as Shoaib Malik named stand-in skipper)

Whatever happened has happened, Sarfraz told media at the airport after landing from Cape Town. I accepted my mistake and ICC s decision is in front of you. (ALSO READ: Got to know that I will be captaining when we got to the ground: Shoaib Malik)

I will improve myself and my performance in the future and I thank my supporters for their backing.

The ICC said Sarfraz will have to attend an education programme to promote the understanding and awareness of issues directly relevant to the offence that he has committed.

In Sarfraz s absence, Shoaib Malik led the team to an eight wicket win in the fourth match in Johannesburg on Sunday. 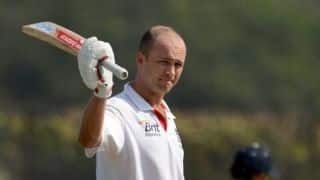