Shahid Afridi has now become the highest wicket taker in twenty20 internationals in the world.

Pakistan skipper Shahid Afridi has made sizable leap in the latest ICC T20I player ranking, which were released post England’s 3-0 victory over Pakistan at Sharjah last night. Shahid Afridi, 35, has become the highest wicket taker in Twenty20 internationals during the course of the series snatching 88 wickets in just 87 matches till date has climbed up to second in the all-rounder list only to be bettered by Bangladesh all-rounder Shakib Al Hasan who is 32 points ahead of him. Afridi has also climbed up three places to number six in the ICC T20I ranking for bowlers after taking 5 wickets for 77 runs in the three match series, is also the highest ranked bowler on both the sides from the series.

Other bowlers to have risen up the rankings are Pakistan’s Shoaib Malik (up eight places to 60th) and Anwar Ali (up 35 to 66th), while England have Chris Jordan (up 13 to 95th) and Adil Rashid (up 50 to 98th) breaking into the top 100 for the first time. The ranking for the batsmen remain unchanged as England’s Alex Hales and  captain Eoin Morgan, who guided his team to victory maintained their third and eighth place on the list. Pakistan’s Ahmed Shehzad  and Umar Akmal, who have both dropped two points apiece to 16th and 18th respectively. ALSO READ: Eoin Morgan thrilled with England’s 3-0 whitewash over Pakistan

Jos Buttler for England has climbed to 45th place where as James Vince, who made his T20I debut entered the ranking at 51th position. James Vince was Man of the Series with scores of 41,38 and 46. Joe Root is just 2 places ahead of Vince at a career high of 53rd. For Pakistan Shoaib Malik climbed up seven places to 58th but the most notable increase in ranking is Sam Billings who sky rocketed to 95th, 151 places above his last ranking. ALSO READ:Shahid Afridi: Pakistan need to work on fitness, fielding ahead of ICC World T20 2016

With the ICC World Twenty20 India 2016 just months away from 11 March to 3 April, reigning champions Sri Lanka just hold a seven-points advantage at the top of the ICC T20I Team Rankings over second-placed West Indies and Australia, who are equal on 118 points 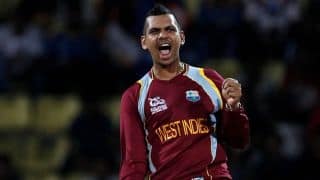