There is no confirmation on the news of the death of his daughter from the cricket fraternity.

The news about Shahid Afridi‘s younger daughter’s death that has been circling around is false. The news broke last night that his daughter has passed away and in no time it started spreading across in different sectors of social media. There is no confirmation on the news of the death of his daughter from the cricket fraternity, that implies the reports are fake. Facebook pages had also posted picture of a child wrapped in white cloth with red rose petals on her body, which was not Afridi’s daughter. Afridi has been in a fix right since the beginning of Asia Cup T20 2016 as Pakistan was out of the tournament early and similarly he was unable to carry the right momentum in T20 World Cup 2016 as well. Soon after resigning as captain of national side, news surfaced on the illness of his younger daughter who was hospitalised for the same. READ: Pakistan Cup 2016: Shahid Afridi, Wahab Riaz out, Salman Butt, Mohammad Asif in

After completion of the World T20 tournament, Afridi did not let out any news on his retirement and mentioned he will take the decision at home while in conversation with Harsha Bhogle and former Pakistan cricketer Wasim Akram post Australia and Pakistan match at Mohali. Though, on April 3 he announced his resignation as skipper of national side, which was followed by resignation of Pakistan head-coach Waqar Younis. Though, Waqar claims some ups and downs in their relation professionally which he mentioned was temperament issues. READ: Shahid Afridi has temperament issues, claims Waqar Younis

Currently, Pakistan Cricket Cup 2016 is being played which is a five one-day tournament based on the draft system and will include teams from the country’s four provinces. Afridi chose to not participate in this tournament because of his trip to the Haj. Pakistan Cricket Board (PCB) chose to include spot fixing guilty players like Salman Butt and Mohammad Asif but they let Afridi and Wahib Riaz out. Sarfraz Ahmed, Shoaib Malik, Younis Khan, Azhar Ali and Misbah-Ul-Haq will lead the sides from Sindh, Punjab, Khyber Pakhtunkhwa, Balochistan and Federal Capital respectively. 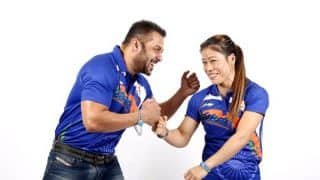