SRK's delay did not take any sheen off the felicitation orgainsed at the Eden Gardens.

Shahrukh Khan was delayed by two hours but that did not take any sheen off the felicitation of Indian Premier League (IPL) champions Kolkata Knight Riders (KKR) in the presence of about one lakh spectators and Chief Minister Mamata Banerjee at the Eden Gardens in Kolkata on Tuesday.

Taking bows repeatedly as a gesture of gratitude to fans, KKR co-owner SRK made a lap of the packed Eden, waving and blowing kisses with his entire squad in tow with loud cries of team slogan ‘Korbo, Lorbo, Jeetbo Re…Ami Kolkata, we rule.’

Holding aloft the trophy, skipper Gautam Gambhir led the victory lap along with co-owner Juhi Chawla. Bollywood heartthrob SRK apologised for his delay on his official Twitter handle, “Sorry Kolkata technical snag on flight. Will be a bit late but will be there. Apologies. Kolkata bound. Delay in flight, but will make it…Insha Allah nothing can stop us now,” SRK tweeted as the reception began at noon.

Earlier, the KKR cricketers on board eight open SUVs made a victory lap of the stadium amid confetti showers soon after the Chief Minister arrived. While about 60,000 people managed to enter the stadium, thousands jostled at the surrounding Maidan areas to gain entry, which was free, but through complimentary passes issued by police stations in the metropolis and CAB affiliated clubs in the state.

Later, after SRK arrived at 1600 hrs, Banerjee, who rescheduled her visit to north Bengal to be present at the felicitation, asked policemen to let people in. With no reception in Bengal being complete without sweets, a specially made giant sandesh weighing 40kg in a replica of Eden Gardens was placed with the Trophy.

The cake was cut jointly by team co-owners Shah Rukh, Juhi Chawla and Jay Mehta along with skipper Gambhir and the chief minister. Unlike the 2012 celebration after their maiden IPL triumph when team members were showered with gold, it was the Cricket Association of Bengal that jointly feted the IPL 7 champions.

The felicitation began with CAB chief Jagmohan Dalmiya handing out gold rings weighing 10 gm each to all the members and support staff of the victorious side. Also presented were Alphonso mangoes on the state’s behalf. In the morning there was chaos outside the Eden Gardens as about one lakh delirious fans turned up only to find team that the co-owner’s arrival was delayed.

People started queueing up at Eden Gardens from as early as 9:00 am as all the roads leading to the venue located in the busy Maidan area were blocked. At times, the police had to wield lathis to disperse the crowd with the help of the Mounted Police.

There was also a host of Bengali film and TV industry celebrities present on the occasion. Needless to say there were traffic chaos and people commuting by public or private transport faced a harrowing time. 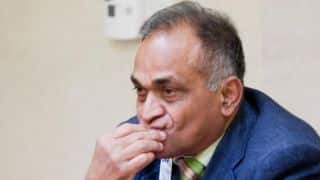 BCCI's finance committee to meet in Delhi on Wednesday 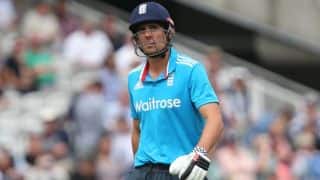