Chris Gayle came into bat and stole the show despite a back injury, as Jamaica Tallawahs won the match with 25 balls to spare.

Jamaica Tallawahs made a fairy-tale comeback to beat Guyana Amazon Warriors after losing four wickets within seven balls in the second innings. They eased to victory at the end, thanks to Shakib Al Hasan, Chris Gayle and Andre Russell who launched a counter-attack on the Guyana Amazon Warriors. Shakib scored a fifty under pressure while sharing important partnerships with Russell and Gayle, taking calculated risks quite often. Earlier, Sohail Tanvir stunned Jamaica Tallawahs by taking two wickets in the early over. A runout made matters worse. Soon, Ali Khan removed Kumar Sangakkara for a duck and things looked really bad for Tallawahs then. ALSO READ: CPL 2016: GAW rope in Maddinson to replace Guptill

Andre Russell played his natural game under pressure, he was given a Free Hit early on in his innings. He stepped up to the task and the ball disappeared in the crowd for a six. Shakib too started hitting the ball for boundaries which released pressure off Jamaica Tallawahs. They shared a partnership of 43 runs from 23 balls before Veersammy Permaul came in and took Russell’s wicket.

Chris Gayle joined Shakib Al Hasan in the middle and things changed for Jamaica Tallawahs from there on. They struck plenty of fours and sixes as the Warriors struggled to slow down the flurry of boundaries. Gayle hit a six to end the proceedings as Jamaica Tallawahs won with 25 balls to spare.

Earlier Guyana Amazon Warriors were off to a decent start despite losing their openers, Dwayne Smith and Martin Guptill. Chris Lynn scored 33 runs from 18 balls maintaining a healthy run rate before Imad Wasim took his wicket. Wasim bowled beautifully, taking two wickets and giving away just 12 runs. Jason Mohammed tried to steady the innings but it the run rate came down as he was ran short of partners. He was supported by Sohail Tanvir in the closing stages of the innings and somehow got their team to a fighting total. 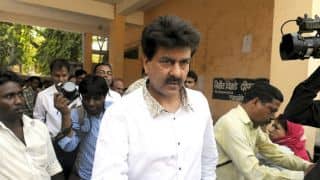