The former couple have been exchanging flirtaceous messages on the social media after the third T20.

London: It was ‘couple reunion time’ as Elizabeth Hurley recently went to see her ex Shane Warne play in the Cricket All Stars Series in Los Angeles. The 46-year-old Australian bowler was seen hugging the 50-year-old actress in Dodger stadium after he won the match, reports the Mirror. Later talking about his meeting, Warne tweeted, “lovely seeing this gorgeous girl.” The pair first got together five years ago and were engaged but split up in 2013. The third match between Warne’s Warriors and Sachin’s Blasters at Los Angeles ended with Warne hitting the winning six to complete a 3-0 sweep of the series, which featured a total of 30 legendary cricketers in matches that were hosted in New York and Houston aside from west coast city. READ: Warne’s Warriors beat Sachin’s Blasters by four wickets to complete 3-0 series victory!

Warne and Hurley were paparazzi favourites during the course of their relationship, which would dominate headlines on an occasional basis. The two began dating five years ago, and were engaged at the Cotswolds mansion together, before their break-up in 2013. Warne currently describes himself as a ‘single dad’, fathering three children with ex-wife Simone Callahan. UPDATES: Sachin’s Blasters vs Warne’s Warriors, Cricket All Stars Series 2015, 3rd T20 at Los Angeles

Warne’s Warriors pulled off a four-wicket victory at the Cricket All Stars third and final Twenty20. Sachin’s Blasters put up their biggest total of the tournament by finishing on 219 for 5, with Sachin Tendulkar and Sourav Ganguly hammering half-centuries. Warne’s Warriors however, put up a brilliant fight during thge middle stages of their innings after losing early wickets, with Warne coming down the track and smashing the penultimate ball for a six to finish the game. 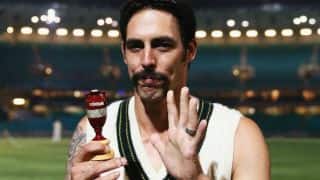 Mitchell Johnson retires as one of Australia's greatest tearaways