Shane Warne: Toby Roland-Jones will do well in The Ashes

Shane Warne: Toby Roland-Jones will do well in The Ashes

Australia great Shane Warne recently said England debutant Toby Roland-Jones will do well in Australian pitches. Though the 29-year old Middlesex pacer took the lone wicket of Hashim Amla on his ODI debut against South Africa earlier this year and contributed well with the bat. However, he was England s show-stealer on Day Two of the third Test, bagging 5 wickets and running through the South Africa batting. His Friday scalps included wickets of Amla, Dean Elgar and Quinton de Kock. Roland-Jones 5-for was the catalyst behind South Africa s 175-run collapse chasing England s first innings total of 353. Toby Roland-Jones: Every kid dreams of this moment

Well, if he bowls like he did this afternoon he ll do very, very well down in Australia with the pitches there. The last couple of seasons they ve left a lot more grass on the pitches so the ball does move a little. It s all about the role in the side and Toby Roland-Jones’s role in this side is to back up (Stuart) Broad and (Jimmy) Anderson. Today he s had a day out, conditions have suited him. They ve been perfect overcast with lights and the ball nipping around, Warne was quoted as saying by cricket.com.au.

He might have to do a few more harder yards on the hard pitches of Australia but if he bowls like he did this afternoon, on a length, he ll do well and he ll like the extra bounce on Australian pitches, he added. 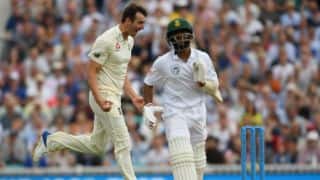 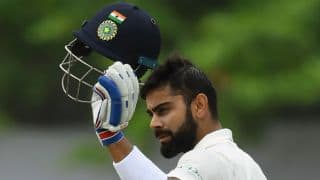