Shane Watson has moved down the order since opening the batting regularly on the last Ashes tour of England.

Australia‘s Shane Watson shrugged off bouncer taunts from England fast bowler Mark Wood and retaliated by issuing his own Ashes warning to the Durham quick on Monday. With just over a week until the first Test starts in Cardiff, Wood, in a BBC radio interview broadcast Sunday, recalled how he was instructed to bowl bouncers at Watson by the all-rounder’s then Australia team-mate Michael Hussey during a net session on the 2009 tour of England. READ: Shaun Marsh unequipped to handle swinging ball; could get exposed during Ashes 2015

The Durham paceman, who took nine wickets in the recent two-Test series against New Zealand after making his debut at Lord’s, said Watson had dismissively labelled him a ‘net hero’ and said he “would love to have a go at me”. Wood, set to feature in England’s side at Cardiff’s Sophia Gardens when the first Test gets underway on July 8, added: “Well, he’s got his chance now. Let’s hope he remembers because he is going to get a few more bumpers.” READ: Australia must tackle ‘problem of plenty’ in an astute manner

For the 34-year-old Watson it was all ancient history.

“Up until this morning I couldn’t remember it all,” Watson said. “It was quite some time ago and I’ve had quite a few net sessions since then. So it’s not something that really stands out. I’ve seen what he [Wood] has been able to do against New Zealand and how he bowls. If I manage to score a few runs in this next tour match with Essex, he might have the chance to have another go at me in the Tests.” READ: England’s only Ashes hope lies in ‘doctored’ pitches

“It will be interesting to see how he bats because we have a couple of guys who bowl at decent pace as well who bowl fast bouncers! He’s obviously got a lot of confidence and is sure about himself. If he’s talking about all this stuff it means he is certainly up for the challenge. He hasn’t been involved in an Ashes series before so he will be tested like we all are.” READ: Australia will need Mitchells to fire to retain urn in England after 14 years

Watson was just as bullish about Australia’s bid to end a 14-year wait to win an Ashes series in Britain, having thrashed arch-rivals England 5-0 ‘Down Under’ as recently as 2013-14. “We are confident we can expose this England team as we did in Australia,” he said.

“We’ve not won a series here since 2001 and it’s a burning ambition to put that record straight. It’s too long for Australians because I guess we get used to winning the big ones. Seeing England raising the urn at the Oval on the last two occasions certainly burns very deeply in me and the other guys.”

However, Watson must earn the right to face England in Cardiff. He proved his form with the bat in the warm-up 255-run win over Kent in Canterbury but did not bowl because of soreness and so allowed Mitchell Marsh to steal a march on him in the battle for the position within the Test side of seam-bowling all-rounder.

Watson has moved down the order since opening the batting regularly on the last Ashes tour of England, which saw Australia beaten 3-0 in 2013. Although he made his debut in 2005, the fact that Watson has appeared in 58 Tests is a testament to the way in which injuries have repeatedly blighted his career.

Watson, though, does expect to bowl in Australia’s final warm-up match before the first Test, a four-day fixture against Essex in Chelmsford starting on Wednesday.

“I aim to bowl a good 12 or 15-over stint against Essex,” he said. “Having a rest from bowling in the first game allowed my body to regenerate but I know how important my bowling is to give myself the best chance of being picked for Cardiff.” 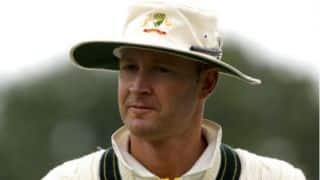 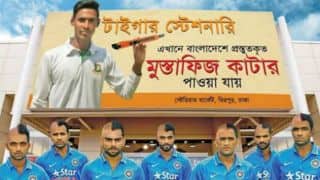