Watson admitted that he was initially concerned about changing his eating patterns.

Australia all-rounder Shane Watson has revealed a controversial new low-carbroutine that has helped him lose weight and become less grumpy.

Sports people have traditionally been encouraged to ‘carb-load’ ahead of big bouts of exercise, with professional athletes often gorging themselves on pasta and rice ahead of games or races. But some experts are now saying that carbs should be kicked in favour of fat-loading.

While talking on ABC’s Catalyst program, which is set to air an episode that claims humans have no nutritional requirement to eat carbohydrates, Watson admitted that he was initially concerned about changing his eating patterns to cut out such a large part of his diet, News.com.au reported.

Watson revealed that his first question was, what about his arteries. Cricket Australia’s sports physician Dr. Peter Brukner , who has worked extensively with Watson to try cure him of his injury woes, described the all-rounder as always having a weight problem despite doing high levels of exercise.

Brukner said that the concept of the more fat one eats, the more one loses is hard to accept, but added that it has definitely helped Watson lose weight. The doctor stated that the major benefit through that is Watson is much less grumpy than he used to be when he was dieting.

Watson made a successful return to international cricket last week for the Twenty20 series against South Africa, and is now gearing up to play his first ODI since January when Australia takes face South Africa in Perth on Friday. 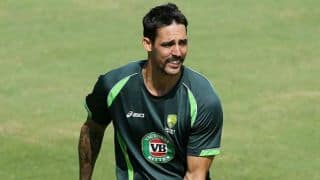