Shane Watson scored 143 off 107 deliveries in the fifth and final One-Day International (ODI) against England at The Rose Bowl on Monday. 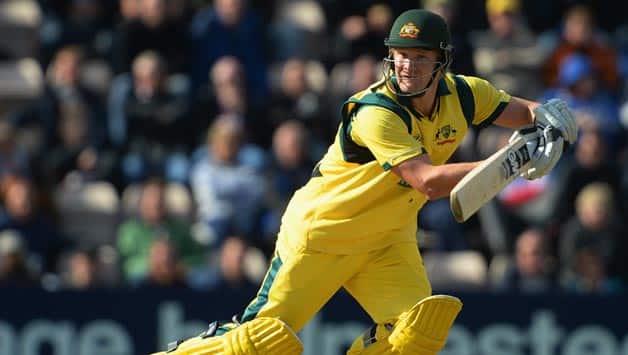 Shane Watson reached his 5,000 ODI runs in the 5th ODI against England at The Rose Bowl © Getty Images

Shane Watson scored 143 off 107 deliveries in the fifth and final One-Day International (ODI) against England at The Rose Bowl on Monday.

Watson became the 14th Australian to score 5,000 ODI runs and in the process helped the visitors in posting a challenging total in the series decider. Like in Tests (fifth Test where Watson got 176 at The Oval), Watson seemed to have reserved his best for the last. The feature of Watson’s innings was the positive approach.

Walking in at the fall of Phil Hughes wicket, Watson showed his aggressive intent right from the outset. He kick-started his innings with a pull shot off debutant Chris Jordan through mid-wicket.

Play was held up after 9.3 overs as showers got too heavy for the play to continue. After the break Ben Stokes stuck immediately removing Aaron Finch for 26. The Australian opener played at a wide delivery only succeeding to gift a simple catch to captain Eoin Morgan at backward point. Matthew Wade was out off the next ball after he gloved a catch to ‘keeper Jos Buttler.

From here on Australia counterattacked and took the attack to England. Michael Clarke, who was doubtful starter before the start of the match, controlled the innings and gave a good company to Watson. The duo added 163 for the fourth wicket off 128 deliveries. Clarke departed mistiming the pull off Jordan; the ball popped up at mid-off and was taken by Kevin Pietersen.

From here, Australia seemed to be losing the plot. George Bailey and Adam Voges were dismissed for four and eight respectively but Watson was going hammer and tongs after his ton. In the 44th over of the innings bowled by Joe Root, Watson took him on for 28 runs. A six over long-on was followed by a four over deep square-leg thus making Watson the 14th Australian to score 5,000 ODI runs. He celebrated this achievement with a six over deep mid-wicket, it was followed by a slog-sweep. The over ended with a murderous shot which bisected the deep mid-wicket and deep square-leg.

Stokes was pick of the bowlers picking five for 61 in his ten overs.