Shane Watson was dropped for Wednesday's game at the WACA to make way for fellow all-rounder James Faulkner.

Perth: All-rounder Shane Watson refused to give up on his international career on Thursday after being dropped for Australia’s record-breaking 275-run World Cup win over Afghanistan. The powerful right-hander’s dual ability with bat and ball has made him an integral part of the limited overs team for many years and he averages over 50 in World Cup cricket. Full Scorecard: Australia vs Afghanistan ICC Cricket World Cup 2015

But he was dropped for Wednesday’s game at the WACA to make way for fellow all-rounder James Faulkner, who was returning from injury. “I believe in myself and my own abilities. If an opportunity comes along, I’ll be ready to go,” Watson said. “I know I haven’t scored enough runs, so I’ve only got myself to blame. That’s the way it goes.”  Over-by-Over Updates: Australia vs Afghanistan ICC Cricket World Cup 2015

Watson, who turns 34 in June, was an onlooker as Australia trounced Afghanistan and suffered the ignominy of seeing his name wiped from the record books when he and Ricky Ponting’s 252-run partnership in a one-day international for Australia was passed by David Warner and Steve Smith. Australia vs Afghanistan, ICC Cricket World Cup 2015, Pool B Match 26 at Perth: Photo Gallery

Watson’s individual Australian record of 185 not out also looked set to fall, until Warner holed out for 178. Australia captain Michael Clarke said Watson had not shown any disappointment during the match, even though Faulkner made just seven in the team’s World Cup record total of 417. “I thought ‘Watto’ handled it really well,” said. “It’s obviously a tough decision for the selectors. He was fantastic around the group all day.”

Watson has played 182 ODIs and 56 Tests in his career and from 2012-2014 he was Australia’s best-paid cricketer. According to Forbes magazine, Watson earned almost $6 million in that period, making him the sixth richest player in the world and the highest earner outside of India. Top 10 batsmen in ICC Cricket World Cup 2015

Clarke wouldn’t be drawn on Watson’s future, saying that was in the hands of the selectors. Australia selection chief Rodney Marsh said: “It’s a big decision but it’s one we thought we had to make because in Shane’s last 10 one-day games he’s got 220 runs at an average of 22.”  Top 10 bowlers in ICC Cricket World Cup 2015

“Unfortunately he’s been getting starts but he hasn’t been going on with it and we had to fit James in and someone had to go.”

After the easy win over Afghanistan, Clarke said the Australians were expecting a much stiffer challenge against Sri Lanka at the SCG on Sunday. “They are going to be really tough team to beat,” he said. “They like playing at the Sydney Cricket Ground and they are playing some really good cricket.

“They have got experience and that is always part of a good team in major tournaments, it gives you a good advantage. We are really excited about and the talk in the change room was about taking this momentum into Sydney. It is an important game for both teams.” 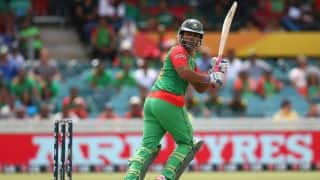