Shardul Thakur was one of the leading wicket-takers in the Ranji Trophy 2015-16.

New Delhi: It is the rigours of Mumbai cricket that helped young Shardul Thakur toughen up and he attributed his maiden India call-up to the extra effort that one is expected to put in while stepping in to play for the 41-time Ranji Trophy champions. “I strongly believe that the cricket culture in Mumbai is such that if a young cricketer can survive its rigours, he is certainly destined for bigger things. It is Mumbai cricket and the Mumbai Ranji Trophy team that has helped me get a national call-up,” 24-year-old Shardul told PTI during an interaction. “In Mumbai, being good is not enough. You have to be more than good enough to play for Mumbai at any level. That’s what has been instilled in me since I came to Mumbai. Whether it is my personal coach Dinesh Lad, Mumbai U-25 coach Vilas Godbole, senior team coaches like Praveen Amre and Chandrakant Pandit, they have always told me about the standards that a Mumbai cricketer needs to set,” said Shardul, who has 133 first-class wickets in 37 games. READ: India announce squad for Zimbabwe tour

He feels that his 41 wickets for the Ranji Trophy champions this season has helped him get noticed by the national selectors. “This year, we were a very young Mumbai team that won the Ranji Trophy. I believe my consistency worked in my favour. I had some good spells. Getting eight wickets in a Ranji Trophy final would not have gone unnoticed. Also since Mumbai are always in contention every year to win the Championship, it helps that you get a chance to perform in crunch matches. This always helps in growing in confidence,” said Shardul. READ: India announce squad for West Indies tour 2016

Shardul said his stock delivery is the outswinger and he is working hard to have a more potent incoming delivery in his repertoire. “My strength is my outswing delivery but I have been working on my inswing with the Mumbai Ranji team’s bowling coach Omkar Salvi.” READ: 6 interesting facts about Shardul Thakur

His stint at the Kings XI Punjab (KXIP) has helped him get in touch with Aussie great Mitchell Johnson, who has shared his own experiences with the Mumbai youngster. “Johnson did not give me any specific tips as such but we did have some interactions during my Kings XI Punjab stint. I had asked him about some of his specific spells in international cricket as to how he planned and all. He did share his insights,” he added.

Till now, Shardul’s overseas experience has been being part of KXIP in Dubai and some practice games in Sri Lanka but he would like to speak to senior players like Rohit Sharma to get an idea about what kind of pitches he can expect in the West Indies. “Obviously I will speak to the senior players to get an idea about what to expect in the Caribbean. I will definitely do my homework before leaving for the tour.” 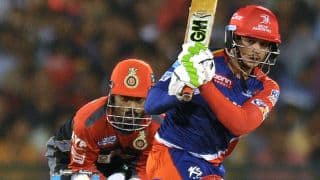