Since returning to Australia after a poor Test series in the UAE, Marsh has scored 80, 98 and 163* for Western Australia.

His place in Australia s Test team under scrutiny after 12 innings without a fifty, Shaun Marsh has delivered a timely reminder of his batting skills with an unbeaten 163 in a five-wicket win for Western Australia in the latest round of Sheffield Shield matches.

The 35-year-old sealed a target of 313 over South Australia on day four at Adelaide Oval, putting on 164 for the fifth wicket with Will Bosisto to hand the opposition their first loss in four games. Marsh s innings was embellished with 22 fours and two sixes and came from 264 deliveries faced.

“It was nice to get the win and nice to get some runs as well,” Marsh said. It’s outstanding for us. We have played some really good cricket but I don’t think we were at our best this game. So that is a positive, we have got some really big improvement … but to get a win was great for this young group.”

Since returning to Australia after a poor Test series against Pakistan in the UAE, where he managed 7, 0, 3 and 4 to extend a lead phase dating back to the Ashes in January, Marsh has scored 80 and 98 in a seven-wicket Shield win over Tasmania followed by 22 and 106 in two ODIs against South Africa after being set back by an abscess on his buttock.

Justin Langer, Australia’s coach, last week put faith in Marsh by saying that when it was his day there was “no better player in Australia”.

In 12 Test innings since he scored the second of two centuries at home against England, Marsh has a best of 40 and an average of 13.41.

The names of uncapped Victorian batsman Marcus Harris, who has 374 runs at 93.50 this Shield season, and Peter Hanscomb are the leading candidates to take make Australia s Test squad for the four-match series with Australia from December 6 in Adelaide. Matthew Wade is another name doing the rounds for his batting feats for Tasmania in the Sheffield Shield this season, which puts him at second in the run charts with 412 at 82.40. 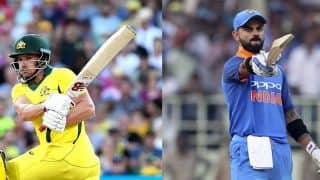