Warner's early blitz was followed by a well made unbeaten 64 by Dhawan to chase the target.

Buoyed by one of the best knocks in the Indian Premier League (IPL) 2014 in David Warner‘s stunning 90, Sunrisers Hyderabad (SRH) made light weather of a massive target set by Chennai Super Kings (CSK) in the 50th match of the tournament.  Warner was ably supported by Shikhar Dhawan at the start where he played a sheet anchor’s role and carried on from all the good of his in-form teammate had put to steer his team to a comfortable six wicket win.

Earlier Chennai Dwayne Smith‘s early blitzkrieg and solid middle order performances by David Hussey and MS Dhoni propelled Chennai Super Kings (CSK) to a formidable 185 for three after being asked to bat by Hyderabad on a Ranchi wicket that didn’t show any demons.

After Chennai scored a massive 185 for three after being put into bat by Hyderabad,  Warner got the visitors off to a flying start with two hard-hitting boundaries in the first over of Mohit Sharma. The Australian opener spanked the first ball when he was offered width and was trashed on the off-side. The second boundary was down the ground and the fielders had no chance and signs were ominous.

Warner caused further damage off Ravichandran Ashwin’s first over with a huge six over the bowler’s head and repeated the same a few deliveries later. This time the result was a boundary. Mohit continued and some ordinary bowling saw some spanking shots on the off side.

Young Australian cricketer of the year John Hastings came into the attack and Warner went after him as well. First the bowler sprayed on the leg side and ball went to the boundary and more bad balls from Hastings meant more damage and a total of extraordinary five boundaries came of the over. It was a nightmarish start for Hastings in the IPL. Looking uninterested and depleted, Warner was fully capitalising on the lax effort by the home team and the score raced to 64 for none in just six overs.

The spinners were surprisingly poor and Ravindra Jadeja in particular was singled out for some special treatment by Warner and he brought his fifty in just 25 balls. The carnage did not stop there and Warner still found gaps at will and looked poised to score a century. Just then Chennai found an unlikely hero in Hastings when the power-hitting Australian cut the ball onto his stumps.  Dhawan took off from where Warner left and went after the slower bowlers. It was apparent that Chennai was missing Ben Hilfenhaus’s presence and even Naman Ojha got on to the act with a huge six. Dhoni’s bowling changes were uninspiring and it could well do with the lack of options available at his disposal. Ojha departed towards the end, trying one big hit too many and Aaron Finch went back to the pavilion of a rather silly run-out.

Looking for the elusive big hit, even skipper Darren Sammy departed after a fine catch at long on by Faf du Plessis and Venugaopal Rao put an end to the stretched nature of proceedings by lofting Jadeja down the ground to inflict Chennai their third consecutive loss. 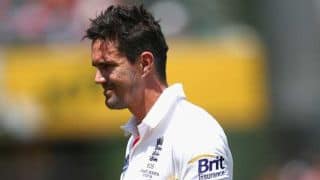