New Delhi: Veteran West Indian batsman Shivnarine Chanderpaul is hopeful of battling the odds as far as his comeback is concerned and is aiming for one last shot to complete 12,000 runs in Test cricket before retirement. “My ambition is to become the first West Indies batsman to score 12,000 runs in Test cricket. That will be a huge achievement and something that I will cherish forever. I want to retire as the highest run-scorer in West Indies cricket. I hope I am given a chance to realise my dreams,” Chanderpaul, who is just three weeks short of his 41st birthday, told PTI during an interaction. ALSO READ: Shivnarine Chanderpaul still wants to play Test cricket

Chanderpaul has 11,867 runs from 164 Tests with 30 centuries at an average of 51 plus. However very poor returns against England (92 runs from 6 innings) prompted the team management and selectors look for a change when Australia came calling in the next series. “I still feel I am playing well and have the hunger to perform at the highest level,” said Chanderpaul. ALSO READ: Shivnarine Chanderpaul’s axing from West Indies team distresses Guyana

Recently, former Brazilian World Cup star Rivaldo and his son Rivaldinho played and scored in the same match for second division Brazilian club Mogi Mirim and Chanderpaul knows a thing or two about how it feels to play alongside his son. Chanderpaul recently played with his 19-year-old son Tagenarine in an official first-class match between Guyana and Windward Islands. ALSO READ: Brian Lara censures WICB over handling of Shivnarine Chanderpaul

“It was a great experience to play alongside my son Tagenarine. Playing a first-class match with one’s son is obviously a proud moment for any father. Although, we did not get a chance to bat together in the middle. He scored 40 (in the second innings) out of total of 171. He looked compact and played the first-class level bowlers well. The more he plays, the more he will improve,” said the dogged left-hander. READ: Shivnarine Chanderpaul should call it a day

Chanderpaul has played this edition of Caribbean Premier League with Guyana Amazon Warriors but his couple of matches went without much success. “I played only two matches and didn’t score many. I got out even before I had settled down. But I am always there to guide the juniors when they need me. I won’t see it’s like a mentoring role but more about helping them out with conditions and my knowledge. Little bits of information at times prove to be very important,” said the man, who is only 86 runs shy of Brian Lara’s all-time highest Test score of 11953. 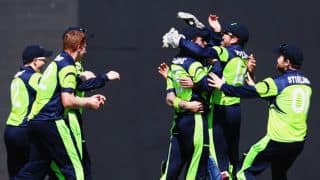 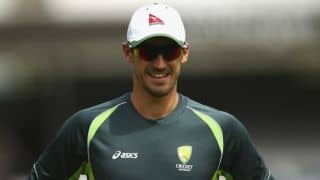 Ashes 2015: England do not know what sort of pitches they want, says Mitchell Starc