Karachi: Former Pakistani pacer Shoaib Akhtar has advised tainted bowler Mohammad Aamer to ‘hire a serious shrink’, adding that he needs to be psychologically tough to perform at his optimum. The Rawalpindi Express admitted that the match-fixing trio (Mohammad Aamer, Salman Butt and Mohammad Asif) have done extremely wrong, but added that they need to play and bring glory back to Pakistan if they want to wash that off. According to the Dawn, Akhtar further said that millions of people will judge them, but they need to make sure that the stigma fades away. Shoaib Akhtar: India should not play Pakistan until border unrest settles down

The 40-year-old also said if the disgraced trio wants to apologise in the truest sense, then, they should bring the T20 World Cup back next year, and Pakistan will forgive them. The three players were found guilty of various offences of corrupt behavior relating to the Lords Test between England and Pakistan in 2010 and will be eligible for an international return in 2016 after going through a new Pakistan Cricket Board (PCB) rehab programme. Mohammad Aamer stages comeback in Pakistan team

Aamer was the youngest of the three (Butt and Mohammad Asif were the other two) to get implicated in the crime and served six months in jail following an investigation in Britain. ICC has banned him for five years from all cricket. Wisden had shortlisted him as Cricketer of the Year, but eventually removed him, eventually naming only four instead of the usual five. Pakistan rule out early international return for Mohammad Asif, Mohammad Aamer, Salman Butt 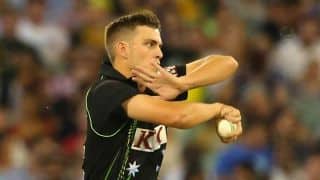