Shoaib Akhtar will be seen on the small screen judging the comedy show "Indian Mazak League".

Former Pakistan speedster Shoaib Akhtar, popularly known as ‘Rawalpindi Express’, says it is for his fans and filmmakers to decide whether a film based on his life should be made or not. But he wants Bollywood’s superstar Salman Khan to play his role “in the biopic, if that happens”. From “Bhaag Milkha, Bhaag” to “Mary Kom” to “Sultan” and “Azhar”, biopics on sports stars seem to be the flavour of the season in Bollywood. And Shoaib Akhtar, who will be seen judging an upcoming comedy show “Indian Mazak League”, agrees with it.  “I know that is the trend these days, but I am no one to decide that. If people think that my life is interesting and inspiring, then they can make a movie out of it. If not, then let it be. It is for fans and filmmakers to decide,” Akhtar told IANS in an email interview from Rawalpindi, Pakistan. ALSO READ: Shoaib Akhtar unhappy with BBC for terming Mohammad Aamer as ‘spot-fixer’

And should that happen, Akhtar has his preference. “I’d like to see Salman Khan playing my role in the biopic, if that happens.” For now, Akhtar will be seen on the small screen only judging the comedy show with Indian cricketer Harbhajan Singh.  The show will go on air on Life OK channel soon. Meanwhile, India skipper MS Dhoni’s most awaited biopic is set to release on September 30. The movie features Sushant Singh Rajpur as Dhoni while Kiara Advani will play the role of Sakshi Singh Dhoni. ALSO READ: Shoaib Akhtar: Harbhajan Singh, Yuvraj Singh are my younger brothers

Fox Star Hindi released the official poster of the movie on the eve of Dhoni’s 35th birthday. Dhoni, who is celebrates his birthday on July 7, was greeted with wishes from different fraternities that included cricketers Faiz Fazal, Virender Sehwag, Sachin Tendulkar and VVS Laxman while Bollywood actor Amitabh Bachchan also wished the Indian limited-over skipper from his end. 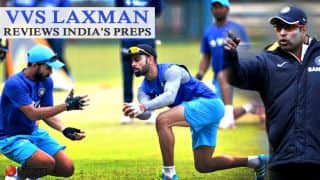