Currently, Pakistan are 98 for the loss of three wickets in 11 overs with opener Mukhtar Ahmed on 48.

Pakistan batsman, Shoaib Malik was run out for mere seven by Prosper Utseya, against minnows, Zimbabwe in the 2nd and final T20I at the Gaddafi Stadium in Lahore on Sunday. Currently, Pakistan are 98 for the loss of three wickets in 11 overs with opener Mukhtar Ahmed on 48 and Umar Akmal on one. Live Blog: Pakistan vs Zimbabwe, 2nd T20I

Earlier, Zimbabwe skipper, Elton Chigumbura won the toss and elected to bat first, as they finished on 175 for the loss of three wickets. He made a couple of changes in the squad with Prosper Utseya and Chamu Chibhabha coming in for Tinashe Panyangara and Richmond Mutumbani, while Pakistan skipper, Shahid Afridi made three changes as Imad Wasim, Nauman Anwar and Mohammad Rizwan coming in for Mohammad Hafeez, Wahab Riaz and Sarfraz Ahmed. Live Scorecard: Pakistan vs Zimbabwe, 2nd T20I 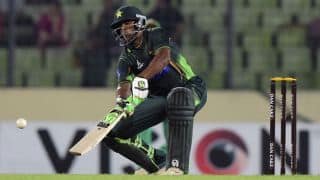