Shreyas Iyer was caught by Tim Southee off the bowling of Chris Morris.

Rajasthan Royals stand-in skipper Steven Smith won the toss and elected to field. Delhi Daredevils were off to a flying start, thanks to some hard-hitting by Mayank Agarwal, who smashed 37 runs off 21 balls, hitting six fours and a six during his stay at the crease before he was caught and bowled by Pravin Tambe. Delhi were cruising at a score of 84 for one at the end of 10 overs.  Free Live Streaming: Delhi Daredevils vs Rajasthan Royals 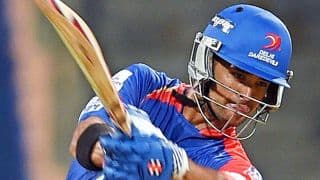 IPL teams with most number of captains