Gill has overtaken as the youngest ever to lead a team in the tournament's history, aged 20 years and 57 days.

Shubman Gill on Monday broke a 10-year-old record set by current India captain Virat Kohli when he led India C in the final of the Deodhar Trophy in Ranchi. Gill has overtaken as the youngest ever to lead a team in the tournament’s history, aged 20 years and 57 days.

However, it wasn’t a happy outing on the field for the youngster as he managed just one run before his team succumbed to a 51-run defeat against India B at the JSCA International Stadium.

Parthiv Patel-led India B opted to bat first and posted 283/7 thanks to half-centuries from Kedar Jadhav, who scored 86 off 94, and Yashasvi Jaiswal, who hit 54 off 79. India B lost both their openers inside nine overs before Jaiswal and Aparajith combined to steady their innings.

Jadhav top-scored for India, hitting four fours and fours sixes during his innings while Jaiswal struck five fours and a six. Allrounder Vijay Shankar, with a brisk 33-ball 45 and Krishnappa Gowtham, who blasted an unbeaten 10-ball 35, an innings that had three fours and as many sixes, provided the late surge to propel their side to a challenging total.

In reply, India C lost their captain and opening batsman Gill off the 12th delivery of the chase. Mayank Agarwal (28) and Priyam Garg (78) led the recovery, with a 54-run partnership for the second wicket. However, their middle-order crumbled to left-arm spinner Shahbaz Nadeem who finished with figures of 4/32 from his 10 overs. Axar Patel (37) and Jalaj Saxena (37*) tried pushing them closer but it wasn’t enough as they were kept to 232/9 in 50 overs. 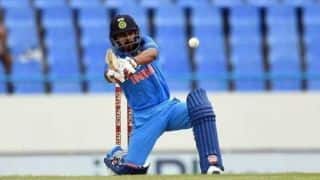