Simon Katich has represented Australia in 56 Tests and 45 ODIs.

Melbourne: Former Australian Test batsman Simon Katich has recalled the infamous dressing room incident of him allegedly grabbing the throat of former skipper Michael Clarke six years ago. The incident took place after Australia defeated South Africa in 2009 in Sydney when the duo had a heated argument over the Clarke’s desire to have Australia’s victory song, ‘Under the Southern Cross I Stand’ sung so that he could leave to attend a separate function. According to Katich, it was this incident that led to the premature exit of his international career after Clarke became a skipper, news.com.au reports. The left handed batsman in 2011 had said that he need not be an Einstein to figure out that it was not just the selectors that had a part in sending him on his way and the dressing room incident didn’t help his cause. READ: Michael Clarke regrets comparing John Buchanan with his dog

Katich, who revisited the dressing room last month at Perth, said that the former skipper should not have left until the tune had been sung. The 40-year-old however, admitted that he grabbed Clarke by throat because he was bugged by the disagreement that was happening between the duo. READ: Michael Clarke’s comments on John Buchanan incredibly harsh: Shane Watson

Clarke recently retired from international cricket, following Australia’s 2-3 Ashes defeat at the hands of England. Australia won the ICC Cricket World Cup 2015 under Clarke’s leadership. Steven Smith took over as skipper in Tests and One-Day International (ODI) sonce his retirement. Since then, Australia have have won an ODI series against England and then followed t up with a Test series win against the West Indies. READ: Simon Katich appointed Kolkata Knight Riders’ assistant coach for IPL 2016 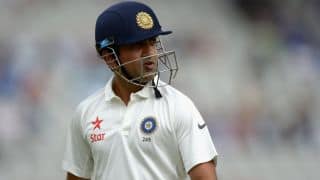