Windward Island batsman Sunil Ambris says he is inspired by the presence of cricket legend Sir Vivian Richards as he prepares with the Sagicor West Indies High Performance (WIHP) team for the upcoming series with Bangladesh A, starting next week in Barbados.

The former young West Indies batsman says he is putting in an extra effort to impress the West Indies icon in the hope of making the final cut, reports CMC.

“He’s been there monitoring a few times that I have batted in the training sessions and he has pointed out a few things that I can work on,” said Ambris.

Sir Viv will work in an advisory role alongside the Sagicor WIHP coaching staff for the remainder of the training camp and until the end of the series against the Bangladeshis which include a pair of four-day, three 50 overs-a-side and two Twenty20 matches to be played at venues around Barbados.

“I have heard about the Sagicor WIHP from other players that have attended it,” said the Vincentian cricketer.“So coming for the first time, it has been what I expected in many ways. It’s been a lot of hard work, but that is what I expected, so I am looking forward to the rest of the camp and making the most of this opportunity.”

Ambris has just completed his maiden season for Windward Islands in the Regional four-Day Tournament, finishing the season with 468 runs from 12 innings in six matches for an average of 39.00.

“It was a bit of a shocker for me. I did not play the first two matches of the season and I was not even in the squad. I only got into the side after Andre Fletcher and Johnson Charles left for the ICC World Twenty20 Tournament in Bangladesh,” he said.

“This was my first experience in the senior Windwards squad, so having been given the opportunity, I tried to grab it with both hands. It was a good season for me. I tried to keep things simple and this worked for me.”

The highlight for Ambris during the recent regional season was a maiden first-class hundred of 114 in his debut innings against Guyana. He ended the season in the same way he started, collecting an enterprising hundred of 102 against Jamaica in the Headley-Weekes Trophy Final.

“My hundred against Guyana was one of my best days in the game ever,” he said.

“It was a hundred on debut — first innings of my first match – and it was a chance-less innings. The hundred against Jamaica was not as fluent as the innings against Guyana, but it was still a great feeling to score a hundred against a side like Jamaica.” 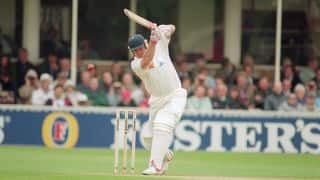