Mumbai captain Shreyas Iyer did not hold back in complimenting the team following its Vijay Hazare Trophy triumph on Saturday.

Mumbai captain Shreyas Iyer did not hold back in complimenting the team following its Vijay Hazare Trophy triumph on Saturday. Chasing 178 to win, Mumbai were reduced to 40 for 4 with pacers Navdeep Saini and Kulwant Khejroliya shredding the top order. But a game-changing partnership of veteran Aditya Tare and Siddhesh Lad brought Mumbai back into the game as they wrapped up the proceedings in 35 overs and won by four wickets.

“Considering the situation we were put in, the lower-order was put to test. The pitch looked really good to bat on, but the batsmen were missing the balls. It was a two-paced wicket,” Iyer said after the match. “You can get wickets in the future, so got to be prepared. Kudos to the batsmen. These performances really add up. It never felt the youngsters were new to the team. So we’ve got to back them. The support staff has helped us a lot. They have been supportive and hats off to their contribution towards the team. I have hardly been home, Bangalore has become my second home. No complaints though, need to keep playing and keep learning.”

Iyer added that Mumbai treated this game like a final and not just “any other match.” Mumbai had won all their matches on their road to the final and it was only fitting that they capped it off by winning the final.

“Amazing is the one word,” Iyer said about Mumbai’s campaign. “The consistency which we have shown in the tournament has been brilliant from the first match. The lower order batsmen hardly got a chance to bat, and today when they got an opportunity, they showed what they are made of. Everybody in our team can bat and bowl. We are a perfect team, and that is why we have won.

“They (Tare and Lad) are batsmen who have performed previously in pressure situations. We believed in them because we knew that they would finish off the game. Ajinkya [Rahane] and I were chatting and said they would win us the game.”

Tare top-scored with 71 and was rightly named Man of the Match. During his counter-attacking partnership with Lad, Tare scored his sixth List A half-century. He was eventually dismissed by Manan Sharma, out leg before wicket, while Lad (48) fell short of his fifty after holing out near the boundary, aiming for a maximum to finish the chase with just two needed to win.

“Team was under pressure and I had to step up. I am glad that we (Lad and himself) stitched a 100-run stand,” Tare said. “It’s been an incredible five weeks for the team. It has been a phenomenal bowling performance. Except for the finals, we won all the games single-handedly. Shaw coming back to the team, strengthens the line-up.”

Losing skipper Gautam Gambhir rued Delhi s inability to put up a competitive total on the board. After Mumbai opted to field in Bengaluru, Delhi kept losing wickets regulatory. Tushar Deshpande drew the first blood with the big wicket of Gambhir (1) in the second over. Unmukt Chand (13) struck two fours before being caught by Rahane at point. Deshpande then removed Manan Sharma (5) to leave Delhi at 21/3 in six overs.

Dhruv Shorey and Nitish Rana tried riding the nervy phase, playing with caution. They had added 39 runs between them and seemed to repair some of the damage when Dubey (3/29) gave Mumbai a breakthrough with the scalp of Rana (13).

“We didn’t have enough runs on the board and we had to take 10 wickets to win the game,” Gambhir said. “We were very consistent but when you lose early wickets it’s difficult to come back. 180 was never going to be enough. Saini is improving, that’s a good sign for Delhi. When you are a fast bowler, you got to take wickets with the new ball.

“That’s what he did. It’s time we start winning trophies. We got Ranji Trophy coming up, it’s going to be a long season ahead. We were the runners-up last time, we want to go one step further this year.” 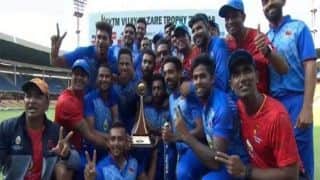