A fine century from Mathews, along with a half-century from Chandimal and Thirimanne's 43, formed the bedrock of Sri Lanka's first-innings display.

Sri Lanka veteran batsman Angelo Matthews led the way with an unbeaten 107 as the hosts conjured up a markedly improved first-innings batting performance on the opening day of the second Test against England at the Galle International Stadium on Friday. Mathews along with wicketkeeper-batsman Niroshan Dickwella – 19* – go unscathed as Sri Lanka scored 229/4 on an attritional day of Test cricket. James Anderson, the veteran pacer in the England XI in place of the rested Stuart Broad, was England’s main strike bowler, as he picked up with 3/24.

After opting to bat, Sri Lanka feared a collapse similar to what they went through in the first Test when they were bundled out for 135 in the first-innings. On day 1 of the second Test, the Lankans lost two early wickets of Kusal Perera and Oshada Fernando cheaply. Perera, attempting to plant one over long-off, only managed an edge off Anderson and gifted a high catch to England captain Joe Root at first slip for 6.

Anderson dismissed opener Perera and Fernando in the fourth over of the day. However, Matthews anchored strong partnerships after that to help Sri Lanka edge ahead at the end of the day. Matthews first put up a 69-run stand with Lahiru Thirmanne and then a 117-run partnership with captain Dinesh Chandimal for the fifth wicket.

Thirimanne scored 43 runs in 95 balls before becoming the third man to fall to Anderson in the 27th over. England got their next wicket only about 40 overs later when Chandimal, on 52 off 121 balls, fell to Mark Wood.

Chandimal and Mathews took Sri Lanka to Tea at 155/3, the partnership went on for nearly an hour after resumption, with the former bringing up his half-century.

Dickwella then stuck with Matthews as he scored his 11th Test century. The former Sri Lanka captain hit 11 fours on his way to the three-figure mark. Dickwella will start the second day on the overnight 19 off 60 balls. 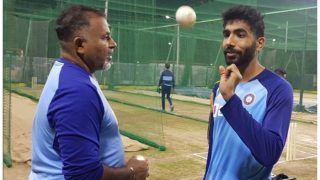 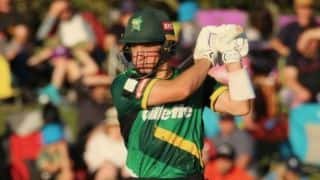