Chamara Silva has been given temporary relief to participate in domestic matches after appealing his two-year ban for misconduct.

Colombo: Former Sri Lanka player Chamara Silva has been given temporary relief to participate in domestic matches after appealing his two-year ban for misconduct, the country’s cricket board said Sunday. In September, Sri Lanka Cricket (SLC) said a domestic first-class match between Panadura Cricket Club and Kalutara Physical Culture Club in January had not been played in keeping with the spirit of the game. The two captains, Chamara Silva, who played in all formats of international cricket for the Sri Lankan national team until 2011, and Manoj Deshapriya, were banned for two years from all cricket-related activities while the other players and managers were barred for one year. SLC hand 2-year ban to Chamara Silva for misconduct in First-Class match

The two clubs were also fined half a million rupees ($3,300) each and the match was declared void. There had been allegations of match-fixing after Panadura won following unusual scoring on the third day of their match, but SLC denied the claims. “On the recommendation of the appeal’s committee… the accused players would be permitted to engage in domestic cricket activities pending the outcome of their appeal,” Sri Lanka Cricket (SLC) said in a statement Sunday. The news comes a week after the International Cricket Council (ICC) said it was conducting an anti-corruption probe in Sri Lanka.

It announced the probe a day after SLC said that 40 contracted national team players had asked for an immediate inquiry into “shocking” allegations by former player Pramodya Wickremasinghe. The former pace bowler and ex-national selector told a local television station last month he was concerned about “unnatural match patterns” and player selections. The SLC said players had refuted Wickremasinghe’s allegations as “totally baseless” and added that they performed for their “motherland… with a 200 percent commitment”. 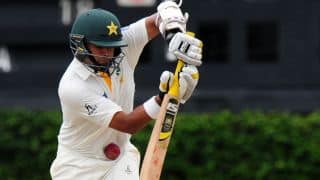