Sourav Ganguly is one of India's most successful captains.

Former India captain Sourav Ganguly has been named as the new president of Cricket Association of Bengal (CAB). Ganguly takes over as President after the passing away of former CAB and Board of Control for Cricket in India (BCCI) Jagmohan Dalmiya passed away on September 2015. Ganguly had earlier met West Bengal Cheif Minister Mamta Banerjee to hold discussions of possibly becoming the next CAB President. Mamta has apparently given her blessings to Ganguly to be Dalmiya’s successor and is said to have made the announcement after discussuon with all the CAB members.  Ganguly had earlier rubbished reports stating that it is too early to decide on Dalmiya’s successor. “To discuss about somebody’s replacement just two days after he has been cremated is not the best thing,” said Ganguly. READ: Sourav Ganguly: It’s too early to decide Jagmohan Dalmiya’s successor

On being appointed the new President, Ganguly said, “I am thankful to my colleagues for giving me this responsibility If the 117 members agree, I will take over the responsibility, will try and do the best.” “I am happy that Abhishek Dalmiya is also part of the CAB team,” he added. Dalmiya’s son Avishek will take over from Ganguly as the Joint secretary of CAB.

Ganguly, who was the captain of the Indian team in the early 2000s when Dalmiya was the President of the BCCI is said to be a close aid and good friend of Dalmiya. “Yes, it is early. All I can say is I have lost someone who was very dear to me. I have grown in front of him. My relationship with Mr. Dalmiya is personal, and at the end of the day, anybody can run CAB and anyone can run board, but for me, he is more important, so that is what it is at the moment,” he added. READ: Sourav Ganguly meets Mamta Banerjee to discuss becoming next CAB President

Dalmiya had passed away at the age of 75 at the B M Birla hospital after suffering from a heart attack on September 20. He joined the BCCI in 1979 and became its treasurer in 1983. He played a key role in securing rights to stage the World Cups in South Asia in 1987 and 1996. READ: PHOTO: Sourav Ganguly pays respect to Jagmohan Dalmiya 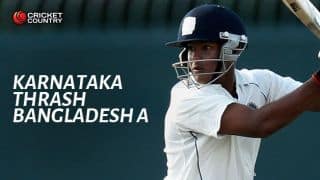