Within a span of three months, the executive committee will elect the office bearers as the former India captain might take the position of President

Former India captain Sourav Ganguly was on Thursday elected in the executive council of the National Cricket Club (NCC) at its annual general meeting at Eden Gardens in Kolkata. Within a span of three months, the executive committee will elect the office bearers as the former India captain might take the position of President soon after the late Jagmohan Dalmiya. “The Cricket Association of Bengal (CAB) president received an overwhelming 600-plus, the maximum votes,” eminent lawyer Ushanath Banerjee, who too was elected into the 21-member executive committee, said. As mentioned on ibnlive, a joint statement signed by chief public prosecutor, chairman and working president Manik Bhattacharya, a total of 614 members were present in the meeting. ALSO READ: Bengal congratulated by CAB after qualifying for Ranji Trophy 2015-16 quarter-finals

“Meeting was extremely harmonious and cordial, we have some highly experienced members in the committee which will elect the office bearers in three months’ time,” another executive member Avishek Dalmiya, who is also the CAB joint-secretary said. Earlier, a revolting NCC group had claimed irregularities in the AGM and moved city civil court. Countering the charges, eminent lawyer Ushanath Banerjee termed it a gimmick with the sole interest of getting a few posts and tickets. “They’re wanting posts. Many of us have received a lot of phone calls, saying ‘get us just six posts and it will be the end of matter’,” Banerjee said. ALSO READ: Sourav Ganguly backs MS Dhoni to play for few more years

Asked about the allegation that notices were sent to a few members without the signature of the secretary which is a must, he said: “It is not needed as per law. For example, if a company has one lakh shareholders, is a signed notice sent to all of them? It’s a wrong interpretation of the article. There’s no provision of a signature under Article 76,” he pointed out. He further challenged the claims that the AGM was held for the first time in 30 years. “It’s a wild allegation. Is everyone sleeping under ROC. Under the law you have to file. It’s a story. You can verify from ROC. This is gimmick. They’re interested in certain posts and tickets, nothing else. We’re not aware of any legal matter involving NCC. It’s a mistake that the said ‘case’ would be heard on January 2. There’s no listing in City Civil Court.” 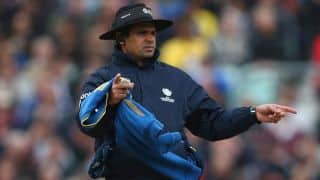 Aleem Dar will mark his 100th Test as umpire during South Africa vs England, 2nd Test at Cape Town