The book deals with many controversies, highlighted by the infamous fall-out with former India coach Greg Chappell.

Penned by a digital marketing expert with an IT company, Satptarshi Sarkar — a die-hard fan of the “Prince of Kolkata” — the book “Sourav Ganguly: Cricket, Captaincy and Controversy” analyses various facets of Ganguly’s life as a cricketer and as captain of the Indian team. Greg Chappell era: A recap of one of the ugliest spats in Indian cricket

“It probes the symbiotic relationship between the man and the cricketer. I used to run a website called welovesourav.com where there would be interesting stories about ‘Dada’ (as Ganguly is affectionately called) and the people reading them would tell me to write a book, now I think I have enough material to compile one and so I did,” said Sarkar, hailing from the city where the left-hand batsman grew up playing the game. Sourav Ganguly: Rahul Dravid admitted that he couldn’t control Greg Chappell

The book deals with many controversies involving the southpaw, highlighted by the infamous fall-out with former India coach Greg Chappell. Harbhajan Singh: Greg Chappell used ‘Divide and Rule’ policy against us

Among the dignitaries present at Monday’s launch were Ganguly’s childhood coach Ashok Mustafi from Dhukhiram coaching centre, former cricketer turned author Raju Mukherjee and ex-Bengal cricketer Gopal Basu. However, Ganguly was not present due to his busy schedule. 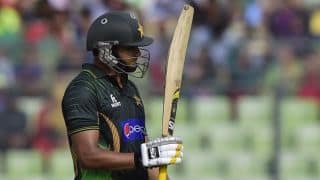 Mahmudullah dismissed for 49 by Wahab Riaz against Pakistan at Khulna