South Africa climb to No. 1 in ICC rankings with 88-run win over Sri Lanka in 5th ODI

South Africa climb to No. 1 in ICC rankings with 88-run win over Sri Lanka in 5th ODI

Set a target of 385, Sri Lanka never managed to get things going, despite a late flourish by Asela Gunaratne and Sachith Pathirana.

South Africa beat Sri Lanka by 88 runs in the fifth and final ODI at SuperSport Park, Centurion. With this win they have whitewashed Sri Lanka 5-0, and more importantly, have moved on top of the ICC ODI rankings. Set a target of 385, Sri Lanka never managed to get things going, despite a late flourish by Asela Gunaratne and Sachith Pathirana. They kept losing wickets at regular intervals. Unlike in the fourth ODI, they never threatened to chase down the target. Chris Morris picked up the first 2 wickets of the innings: he first removed Sri Lankan captain Upul Tharanga, centurion from the previous game, for 7, and then followed it up with the wicket of Kusal Mendis for just 1. Full Cricket Scorecard: South Africa vs Sri Lanka 5th ODI at Centurion

Sri Lanka lost half their side by the 14th over with less than 90 on the board. At that point it seemed South Africa would bowl them out soon, but the sixth-wicket stand between Pathirana and Gunaratne ensured Sri Lanka put up a reasonable score. They did not look threatening at any stage, but at the same time did not give away their wickets cheaply. Gunaratne and Pathirana added 93 for the sixth wicket, but that was never going to be enough for Sri Lanka. Full Cricket Updates, South Africa vs Sri Lanka, 5th ODI at Centurion

Pathirana was eventually dismissed for 56 from 62 balls, Giving Morris his third wicket of the day. Morris rounded off a brilliant day with the wicket of Jeffrey Vandersay, eventually finishing with career-best figures of 4 for 31 from his 10 overs. Gunaratne then added an unbeaten 97 with Suranga Lakmal the second-highest ninth-wicket stand for Sri Lanka as well as the second-highest for any side against South Africa. Gunaratne got to his maiden ODI ton off 106 balls, but that was not enough to save the day for his side. However, Sri Lanka ensured they played out their 50 overs and did reached 296 for 8.

Earlier, Hashim Amla s 154 and Quinton de Kock s 109 ensured that South Africa put up 384 for 6 in their 50 overs. Amla and de Kock put on 187 for the first wicket inside 27 overs that laid the platform for the rest of the side. Faf du Plessis and Farhaan Behardien scored 41 and 32 respectively to ensure South Africa got a mammoth total on the board. Suranga Lakmal was the pick of the bowlers with figures of 3 for 71 in 10 overs. Amla was named Man of the Match for his well-paced hundred, while du Plessis was named Man of the Series for his 410 runs at 102.50 and a strike rate of 105.

Man of the Match: Hashim Amla. 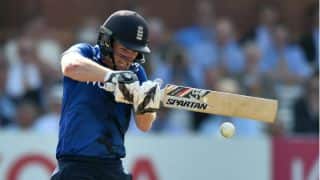