South Africa have leapfrogged England and New Zealand to claim the second spot in the latest ICC ranking for the Test teams.

South Africa have leapfrogged England and New Zealand to claim the second spot in the latest ICC ranking for Test teams. On Monday, South Africa defeated Pakistan in the Johannesburg Test by 107 runs to complete a 3-0 series whitewash.

On the other hand, Pakistan have dropped a spot and are now ranked seventh behind Sri Lanka at sixth.

Chasing 381 to win, the tourists began well with the openers adding 67 runs. On the fourth and final day, they suffered yet another collapse while batting in second innings to be bowled out for 273 in 65.4 overs.

The Proteas gained four points to reach 110 points two more than England who have slipped to third position. New Zealand, with 107 points are at the fourth spot in the list led by India who achieved a historic 2-1 Test series win in Australia earlier this month.

Pakistan began the series with 92 points but are now on 88 points, three points less than Sri Lanka.

Just a single point separates England from New Zealand which means they will have to beat West Indies in the upcoming Wisden Trophy to remain ahead of the Black Caps. 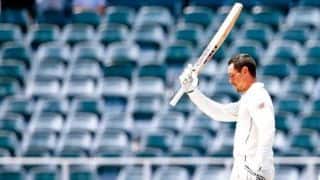