South Africa registered a comfortable 22-run victory over Sri Lanka in the second T20 International at Hambantota to pocket the series with one more match to go. 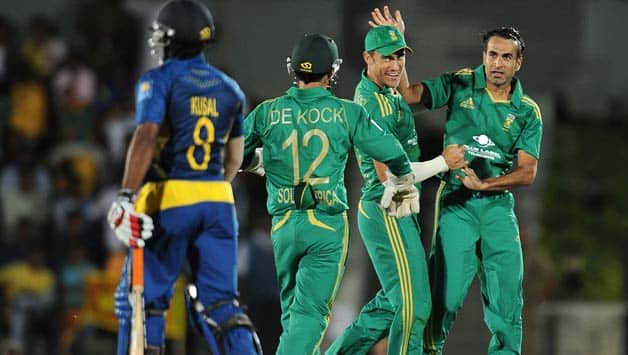 South Africa registered a comfortable 22-run victory over Sri Lanka in the second T20 International at Hambantota to pocket the series with one more match to go.

Sri Lanka were chasing a target of 146 to keep themselves alive inthe three-match series. Lonwabo Tsosobe struck in the first over to claim the prized wicket of Mahela Jayawardene who had replaced Tillakaratne Dilshan. Jayawardene edged an away going delivery to wicketkeeper Quinton de Kock scoring six runs.

The bowlers kept a tight leash on the opposition. 146 was always going to be a stiff target at this venue. Tsotsobe struck again in the fifth over to remove skipper Dinesh Chandimal.

Meanwhile Kusal Perera with a Jayasuriya-like batting style finally appeared to spend some more time on the crease with confident-looking strokes. The South African bowlers bowled reasonably well to tie down the batsmen.

Perera was finally dismissed leg-before by Imran Tahir for 21. Tahir bowling with the wind was effective going for just 21 in his four overs. Kumar Sangakkara and Lahiru Thirimanne tried to up the ante but the pressure of rising run-rate forced the batsmen go for impetuous shots.

None of the Sri Lankan batsmen could insert the much-needed fluency in the innings as the wickets kept falling at regular intervals. Wayne Parnell bowled Thirimanne for 18, while David Wiese removed Angelo Mathews for just one run.

Despite being five down for 88, Sri Lanka still looked threatening with Sangakkara on the crease. Morne Morkel managed to close down that ray of hope as well by dismissing the left-hander as Wiese managed to take a brilliant catch running backwards. As the win seemed close by, Tahir seemed to appeared to be further pumped up appealing ferociously and was even warned twice for landing his foot in the danger area.

As the target got stiffer, Nuwan Kulasekara and Thisara Perera had little scope but to go for the big shots. Kulasekara was eventually dismissed by Morkel as Perera was stranded to wage a lone fight.

Needing 28 off the last over, Sri Lanka managed just five runs in the over to hand a comfortable victory and series to South Africa. Lonwabo Tsotsobe was pick of the bowlers claiming two wickets for 17 in his four overs.

The match was completely dominated by the visitors as they posted a stiff target with David Miller and JP Duminy contributing with useful knocks of 36 and 30 respectively.

Umpire Desraj passes away at 70