South African captain Graeme Smith failed on the opening day of the three-day practice match against Pakistan's second string side at Sharjah on Tuesday, but four other batsmen hit half-centuries. 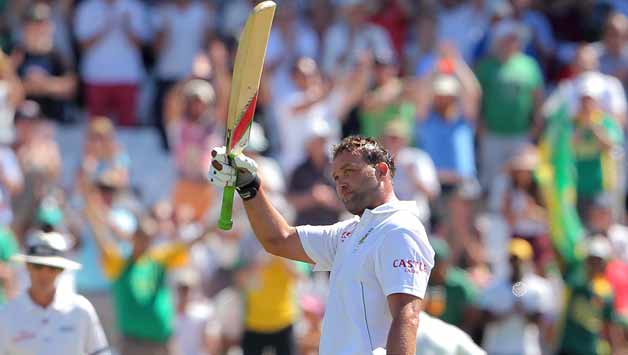 South African captain Graeme Smith failed on the opening day of the three-day practice match against Pakistan‘s second string side at Sharjah on Tuesday, but four other batsmen hit half-centuries.

Smith, 32, managed just two before he was trapped leg-before by paceman Ehsan Adil in the seventh over after Pakistan A won the toss and decided to field at Sharjah cricket stadium.

At close, South Africa reached 332 for five in the match where the first innings will be restricted to 100-overs per side.

Smith, who returned to competitive cricket after a gap of 21 weeks this month, was in need of gaining some momentum before the first of two Tests against Pakistan starting in Abu Dhabi from Monday.

But Smith’s failure was the only miss as Jacques Kallis (70), AB de Villiers (58) Alviro Petersen (58), Hashim Amla (50) and JP Duminy (49 not out) all gained useful batting practice in hot and humid conditions. Faf de Plessis was unbeaten on 25.

Amla and Petersen retired after completing their half-centuries to allow the rest to gain some practice.
Amla admitted South Africa did achieve the task.

“It was very good practice for our team. All the boys are excited as we hadn’t played Test cricket for a long time. It has given us a great opportunity to reflect on what has happened and what we want to achieve,” said Amla, who hoped Smith will regain form.

“Graeme will be fine. He will be more than ready for the Test match. He is an amazing opening batsman. He takes his practice seriously and by the time the Test starts he will be ready,” said Amla of Smith who missed cricket because of an ankle injury.

Pakistani selectors will now watch how their second string batsmen cope against a formidable South African pace attack on Wednesday as they look to fill three remaining places for the two-Test series.
Last week they named 12 players for the series with only one opener in Khurram Manzoor.

South Africa will look to gain more batting practice on spinners as they are set to face off-spinner Saeed Ajmal and two left-armers in Abdur Rehman and Zulfiqar Babar in the Tests.

The second Test will be played in Dubai from October 23 followed by five one-day and two Twenty20 matches.

Pakistan’s main team will play a warm-up game against the national team of United Arab Emirates in Abu Dhabi from Wednesday.