South Africa edged past Bangladesh in all the departments at Mangaung Oval in Bloemfontein, winning the second and final Test by an innings and 254 runs and lifting the series 2-0.

South Africa edged past Bangladesh in all the departments at Mangaung Oval in Bloemfontein, winning the second and final Test by an innings and 254 runs and lifting the series 2-0. Kagiso Rabada was awarded Man of the Match for taking a five-for in each innings. There were as many as four centurions in South Africa s innings, helping them register a mammoth 573 for 4 on the board. Their bowlers then bundled out Bangladesh for 147 and 172.

In the absence of the injured Morne Morkel, South Africa added Duanne Oliver. Bangladesh, on the other hand, made four changes: they drafted in Soumya Sarkar for the injured Tamim Iqbal, while Taijul Islam, Rubel Hossain and Subashis Roy were added to bolster the weakened team. Apart from Tamim, Mehidy Hasan Miraz, Taskin Ahmed and Shafiul Islam were benched.

Mushfiqur Rahim opting to bowl first on grass-layered track did not come as a surprise. That, for that matter, could not anyway have stopped the in-form pair of Dean Elgar and Aiden Markram. While Elgar left no stone unturned to dictate terms to the opposition, Markram took his time to find his feet. However, he went neck-and-neck with Elgar as and when the Bangladeshi bowlers lost their rhythms. Their 243-run escapade was the eighth highest opening stand for South Africa.

Once the centurion openers were sent back, Hashim Amla made sure the Bangladeshis are pushed further into the ruins. Captain Faf du Plessis and he scored hundreds as well, keeping their team on top.

Amla scored his 28th hundred in Test cricket and is now only behind Jacques Kallis (45) in the tally for South Africa. Du Plessis, on the other hand, scored his 7th hundred. The duo added 247 for the fourth wicket.

Of the 8 bowlers used, only Subashis Roy remained effective. He took 3 for 118.

After South Africa declared at 573 for 4, Rabada wreaked havoc on the dispirited Bangladeshi team. Amidst the ruins standing tall was Liton Das. His 70-run knock was the only respite in an otherwise mediocre performance. To inflict more pain on the visitors, du Plessis enforced follow-on and produced an encore. This time Bangladesh added 25 more runs than what they had added in the first innings. 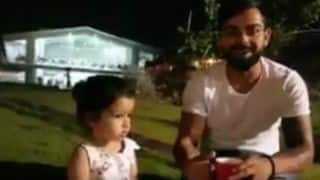