Catch live updates of the third T20I between South Africa and Australia at Centurion.

(South Africa take on Australia in the third and final Twenty20 International at Centurion on March 14, 2014. Catch live cricket scores of the match in our live blog below.)

Quinton de Kock wins the Man of the Series in the 49-over tussle. Starc was another contender, but this kid has been fantastic right from the India series.
Mitchell Starc wins the Man of the Match. He has really been a revelation in the tournament: he was fast, he was dead accurate, and he moved the ball around. Excellent performance.
The Australians took the pace off the ball and bowled a tidy line and length. The South Africans did not, which made all the difference.
Duminy 2-0-27-0 Tsotsobe 2-0-19-0 Hendricks 3-0-21-1 Parnell 2-0-15-1 Tahir 4-0-21-2 Morkel 2-0-26-0
Australia 129/4 (15)
Bailey 12(7), Hodge 11(5)
As easy as they come. 17 off that Duminy over to finish things off.

SIX! Hodge goes straight, Amla gets his fingertips to it on the fence, but the ball still flies over the fence. Four more required.

Can this be the last over?

SIX! Faf brings back JP, who comes round the wicket. Bailey steps out and lofts him over deep mid-wicket. Easy does it.

Hendricks is back. They need him to take a hat-trick. Maybe a couple more.

FOUR! Once again he bowls short outside off, and Maxwell gives it his all! Hundred for Australia!

SIX! Watto! Terrible length from Albie, and Watson gives it his all! There goes it, over deep mid-wicket!

FOUR! Where did that come from? Not a bad ball at all, but Maxwell goes down on the left knee and absolutely smokes it to the square-leg fence!

54 to get in 60 balls. Should be easy unless Tahir pulls off something magical.

Australia 67/2 (8.1)
Watson 14(12)
And Tahir strikes! Slow through the air, Finch slog-sweeps but does not time it all; straight to the eagerly waiting deep mid-wicket. They need more wickets, though.
OUT! Finch c Miller b Tahir 39(27)!

FOUR! Albie bounces high, but Watson gets on to his toes and cuts, places well too!

Tahir now for his leg-breaks.

FOUR! Overpitched by Beuran, and Watson punches him through mid-wicket. Easy four, that.

Watson steers one deftly to deep third-man for a single. Fifty comes up.

FOUR! Overpitched, and driven powerfully through extra-cover. How do you stop this man?

Short-pitched again, and Finch cuts hard — but now they have Tahir on the fence. Just a single.

FOUR! And the third left-arm seamer who bowls short on a slow track. Finch rocks back and pulls. This man is strong!

FOUR! Once again that short-pitched delivery outside off-stump, and Finch gives it everything! You cannot bowl long-hops to Finch on a slow track.

FOUR! This time Hendricks errs, short outside off, and Finch cuts him hard for four!

FOUR! Rank long-hop, Finch square-cuts, and the rest is history.

SIX! And Hendricks hits his first international six! Steps out and launches it straight into the crowd over deep mid-wicket!

SIX! Starc attempts a bouncer, and bang! Albie gives it his all, hooking the ball into the crowds!

Starc is back. He has easily been the bowler of the tournament so far.

SIX! That is humongous! Watto bowls a length-delivery, and Albie gives it his all! Massive!

Bailey gets Watto on…

Hogg to bowl out.

Amla leg-glances NMCN for their first run.   Coulter-Nile to Amla now. He had struggled in the previous match.

Hello and welcome to CricketCountry’s live blog of the third and final T20I between South Africa and Australia at Centurion. The first T20I was washed out due to rain at Port Elizabeth. The second match at Durban was won by Australia by five wickets. 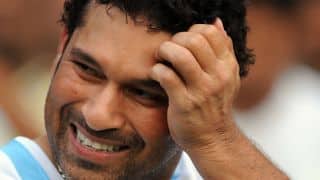