The start of the first T20 has been delayed due to rains.

A dampener to begin with. The first T20 International has been abandoned due to rain. Do join us for the second game, which is on Wednesday.

It has started raining again at Port Elizabeth. So, our wait continues. It just started pouring today and it seemed to be good until yesterday.

The word we are getting is that the toss has been delayed. The umpires will come out for an inspection at 15:00 local, i.e. 18:30 IST.

Hello and welcome to CricketCountry’s live blog of the first Twenty20 International match between South Africa and Australia at St George’s Park in Port Elizabeth. The two teams are coming off from an intense Test series, which was won by Australia by 2-1, but T20s is a different format all together.

This three-match T20 series provides both teams an opportunity to prepare for the ICC World T20 2014, which starts in Bangladesh a week after the last match of the series.

Both squads show considerable changes from the Test teams, with new captains and new players in key roles. With fast bowling spearhead Mitchell Johnson withdrawn to enable him to rest ahead of the world event, Australia’s squad includes only three players who appeared in the Test series.

Nine of South Africa’s 16-man squad played in the Tests but Kyle Abbott, Quinton de Kock and Wayne Parnell only appeared in one Test each, while fast bowler Dale Steyn will miss at least the first two matches after suffering a hamstring strain during the third Test, AFP reported.

South Africa will be missing Dale Steyn’s services for the first two T20Is. 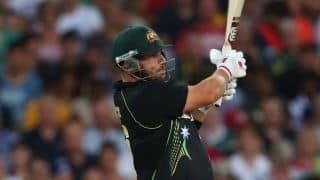 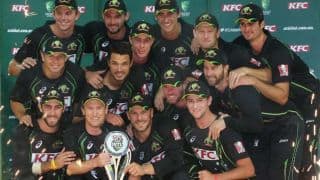