South Africa have started their domestic season on a strong note, while Ireland will now have little time to regroup and iron out the flaws before they find themselves up against the mighty Australians.

When Ireland embarked on the historic tour to South Africa to play two one-off One-Day Internationals against the hosts as well as World Champions Australia, what they had in sight was a rare shot at glory. It is not every day that they get a chance to have a go at the big guns; something, which is important for their development as a side and their long term goal of achieving the Tests status. They have long been looking for such opportunities to play the big boys. So naturally, they looked at these two ODIs as a big chance to impress the world cricket and also improve themselves. However, the first half of these two games has not quite given them the desired result as they went down to South Africa by a huge margin of 206 runs on Sunday. FULL UPDATES: SOUTH AFRICA VS IRELAND, ONE-OFF ODI.

On a bright sunny morning, when Ireland captain William Porterfield won the toss, little did he know that this is the only thing he will get right in the day; both for his team as well as on a personal front too. When his side walked out to chase mammoth 355, it was his experience they were banking on. More so, in the absence of Ed Joyce and Niall O’Brien, it was his services the team needed the most. But he was sent back in the first over by speedster Kagiso Rabada before opening his account.

The early wicket gave South Africa’s young pace attack — which was without the likes of Dale Steyn, Morne Morkel and Kyle Abbott — huge boost, as here on, they were all over the Irishmen and did not allow them to settle in. John Anderson, who came at one-down, struggled from the beginning and could not get going. Paul Stirling on the other hand started off on a confident note, hitting the loose balls towards the boundary area. But he lacked support from the other end, as Anderson also perished shortly. After his difficult stay in the middle, he tried to pull a short delivery from Wayne Parnell, only to find Rabada at fine-leg.

He was replaced by Gary Wilson, who too did not last long and edged a delivery by debutant pacer Dwaine Pretorius to the keeper and left his team in difficult waters at 3 for 41. This brought Kevin O’Brien into the middle and for the first time, it seemed that the Irish batsmen showed intent. The two began playing confidently, taking the attack to the opposition. Both added 36 runs but once this pair broke, Ireland’s slim hopes of making a match out of it also faded. Stirling fell just at the stroke of spin’s introduction, for 40, while Kevin O’Brien scored 41 and perished to the spin of Duminy. INNINGS REPORT: SOUTH AFRICA VS IRELAND: TEMBA BAVUMA’s TON ON ODI DEBUT GUIDES SOUTH AFRICA TO 354/5.

From here on, it was complete spin-show as Aaron Phangiso and Duminy, who was the tormenter in chief, bundled Irish side for 148, thus completing a 206-run win. Barring Phehlukwayo, all the bowlers chipped in with wickets. Duminy took 4, Phangiso and Parnell got 2 while Preotrius and Rabada took a wicket each.

Earlier, riding on Temba Bavuma’s brilliance and sparkling fifties by Quinton de Kock, Farhaan Behardien and Duminy, South Africa posted a huge 5 for 354 on the board. Put in to bat first, South Africa had a tremendous start. Quite a few must have had worries looking at the makeshift pair of Bavuma and de Kock in the absence of Hashim Amla. But the former made the occasion historic by scoring a fluent hundred on his ODI debut. His partner de Kock also continued with his fine form and smashed a splendid 66-ball 82.

The pint-sized Bavuma, who has been a Test regular for the Proteas of late, scored a hundred on his debut and thus became the second South African in the history of ODIs to do so. Before him, only Colin Ingram, who has turned into a Kolpak player now, had achieved this feat. Bavuma also became the 12th cricketer overall to do so. He added 159 for the first wicket with de Kock and even after the latter got out, he kept going strong. PREVIEW: IRELAND’s RARE SHOT AT CRICKETING GLORY.

Bavuma then added 52 runs for the second wicket with skipper Faf du Plessis, who was dismissed for the individual score of 21. Bavuma soon perished, but not before making way into the record books and creating a selection-headache for the selectors. David Miller, who was returning after missing the tri-nation series in West Indies, also could not do much and perished soon. But it was Duminy and Behardien show from here on.

Both these batsmen, especially Behardien, started hitting the bowlers all over the park from the word go. While Duminy played second fiddle by rotating strike and hitting the odd ball for a boundary, Behardien was particularly severe, scoring a 21-ball fifty, which was filled with 3 sixes and equal number of fours. The pair added 87 runs in 40 balls and managed to get the score past 350, which at one stage was looking difficult after the dismissal of Miller. Behardien was dismissed on the last ball, scoring a quickfire 22-ball 50, while Duminy remained unbeaten on 52 off 43 as South Africa posted 5 for 354 from the stipulated 50 overs. The Ireland bowlers were reduced to hapless figures, with Craig Young and Kevin O’Brien picking 3 and 2 wickets respectively but leaking runs aplenty.

South Africa have started their domestic season on a strong note, while Ireland will now have little time to regroup and iron out the flaws before they find themselves up against the mighty World Champs Australia. 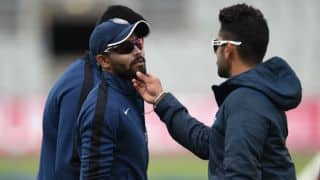