New Zealand remained on 15 for two in reply to South Africa's first innings total of 263.

A wet outfield prevented any play on the third day of the first Test between South Africa and New Zealand at Kingsmead on Sunday. New Zealand remained on 15 for two in reply to South Africa’s first innings total of 263. Rain, which started falling at lunchtime on Saturday, continued through Saturday and into Sunday morning. Although the sun was shining at the scheduled resumption of play, there were extensive wet, muddy areas on a field which was re-seeded in June and was flooded by a freak storm in July. After an inspection by the umpires at midday, it was announced that underfoot conditions remained treacherous, with water coming up to the surface. LIVE CRICKET SCORECARD: South Africa vs New Zealand, 1st Test at Durban

Following a further inspection two hours later, it was decided conditions would not improve in time for play to get under way. Earlier on Day Two, Steyn, playing in his first Test match since December, bowled a mesmerising spell of two for three in six overs, dismissing both New Zealand opening batsmen. LIVE CRICKET UPDATES: South Africa vs New Zealand, 1st Test, Day 3

At 33, questions had been asked Steyn’s ability to come back with anything like the impact that made him the long-time number one-ranked Test bowler. He has dropped to number three after playing in only two out of South Africa’s previous eight Tests, failing to complete either because of groin and shoulder injuries.

But on a greenish pitch under a heavily overcast sky, it was though a rewind button had been switched as Steyn bowled with immaculate control, backed up by Vernon Philander, also coming back from injury. 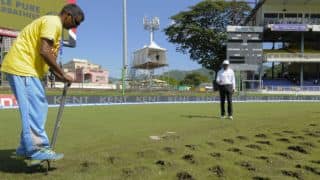