Hashim Amla hit his 27th one-day international century as South Africa made 266 for two in the first of five matches against Pakistan at St George's Park on Saturday.

Hashim Amla hit his 27th one-day international century as South Africa made 266 for two in the first of five matches against Pakistan at St George’s Park on Saturday.

Amla (108 not out) shared a second-wicket partnership of 155 with debutant Rassie van der Dussen (93) but the pair were unable to dominate against steady bowling on a slow pitch.

“It was a tough wicket,” Amla told SuperSport television as he left the field at the end of the innings. “You have to bide your time. I think it’s a good total.”

Although Pakistan were only able to claim two wickets, they bowled well on a windy day, with captain Sarfraz Ahmed juggling his bowlers in short spells.

Scoring was slow during the middle overs with seamer Hasan Ali and leg-spinner Shadab Khan bowling particularly well. They took one for 42 and one for 41 respectively in their ten overs.

Amla and Reeza Hendricks (45) put on 82 off 105 balls for the first wicket before Van der Dussen made a slow start in his first one-day international, taking ten balls to score his first run.

But the scoring rate picked up and Van der Dussen hit six fours and three sixes in a 101-ball innings. Amla made his runs off 120 balls with seven fours and a six. 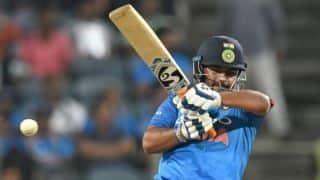