Rain stopped play during the third one-day international between South Africa and Pakistan at SuperSport Park on Friday.

Rain stopped play during the third one-day international between South Africa and Pakistan at SuperSport Park on Friday.

The interruption came after 16.5 overs of South Africa’s innings as the home side chased down a 318-run target.

A minimum of 20 overs a side is necessary for a result.

In the third ODI of the ongoing five-match series against South Africa, Imam ul Haq struck 101 to power Pakistan to 317/6 in Centurion. He struck eight fours and consumed 116 deliveries during his innings laying the ground a challenging total.

“It was a very special hundred. Coming here in SA, we had the belief that we ll win. That message my selection, all that stuff. As everyone knows I m the nephew of the chief selector [Inzmam]. I really want to thank all the Pakistan media and Pakistan people who always criticise me. Really want to thank them. [My] success I have is because of them, Imam said.

During his innings, the left-handed batsman also became the second fastest to score 1000 ODI runs after teammate and fellow opener Fakhar Zaman. He did thank current Pakistan coach Mickey Arthur and batting coach Grant Flower for supporting him through his struggles and continuing the faith.

Want to thank the supporting staff, Grant Flower and Mickey Arthur for supporting me like crazy. Without my parent, I don t think I would ve been standing here, the 23-year-old added. 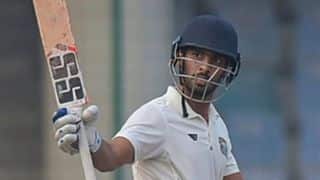