Upul Tharanga will lead Sri Lanka in this ODI series against South Africa, just like he did in the Zimbabwe tri-series, few months ago.

Sri Lanka will be high on confidence in the first One-Day International (ODI) against South Africa at Port Elizabeth, after winning the T20 International (T20I) series 2-1. Sri Lanka had a disappointing Test series and they have done incredibly well to bounce back in the T20I series after being 1-0 down. But the victory came at a cost. They will not have their regular skipper Angelo Mathews as he has flown home for personal reasons. As a result, Upul Tharanga will lead Sri Lanka in this ODI series, just like he did in the Zimbabwe tri-series, few months ago. Sri Lanka will also not have the services of fast bowler Nuwan Pradeep and batsman Danushka Gunathilaka. Full Cricket Scorecard: South Africa vs Sri Lanka 1st ODI at Port Elizabeth

Pradeep injured his hand in the first T20I, when he was attempting to stop a ball hit back at him off his own bowling. Gunathilaka, on the other hand, has been complaining of back pain. South Africa are boosted by the return of their limited-overs skipper AB de Villiers. He scored an impressive 63 on his return to the international arena in the third T20I. He also struck an 87-ball century in a 50-over match for Northerns against Easterns, just a couple of days before the third T20I. South Africa will also be without fast bowler Lungi Ngidi, who was their star in the T20I series. Ngidi picked up 6 wickets in 3 matches at a miserly economy rate of 5.50.

Both sides as a result had to call up reinforcements. Sri Lanka have called Chaturanga de Silva (the third de Silva in the squad after Dhananjaya and Thikshila) and the uncapped duo of Lahiru Madhushanka and Sadun Weerakkody. De Silva has not played an ODI since 2014 and Weerakkody can also be used as a wicketkeeper, if needed. Weerakkody is the third wicketkeeper to be included in the squad after Dinesh Chandimal and the star of the third T20I Niroshan Dickwella. Madhushanka can chip in with his medium pacers and also score runs at a brisk pace, like he does in domestic cricket for Colombo Cricket Club.

Sri Lanka called in Lahiru Kumara, Jeffrey Vandersay and Vikum Sanjaya as the replacements for Isuru Udana, Thikshila de Silva, Seekkuge Prasanna, who played in the T20I series. Kumara is yet to make his ODI debut, but has been impressive in the four Tests so far. Leg-spinner Vandersay was part of the team for the Zimbabwe tri-nation series, whereas Sanjaya is yet to make his international debut.

South Africa fielded a relatively weakened side for the T20I series, but all their big guns including Faf du Plessis, Quinton de Kock, Hashim Amla and de Viliers himself will be back in action. De Villiers last played an ODI for South Africa in June 2016. However, South Africa are yet to name a replacement for Ngidi, who tore his abdominal wall. South Africa are however not short of fast bowling options as they have Wayne Parnell, Kagiso Rabada, Andile Phehlukwayo along with all-rounders Dwaine Pretorius and Chris Morris.

Dark clouds are expected around Port Elizabeth on Saturday. There could be some mild showers as well. We have already seen the first T20I at Centurion being reduced to 10 overs per side due to rain, which could play a part in this match as well. 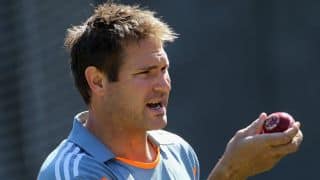