South African captain Faf du Plessis will be seeking to find Sri Lanka s “breaking point” as early as possible when the first of two Tests starts at Kingsmead on Wednesday.

They have had a tough time in Australia and there have been a lot of things happening away from their team, Du Plessis said on Tuesday. (READ MORE: Decline in talent, lack of passion saddens me: Muttiah Muralitharan)

“It s not ideal for them but I will always respect the opposition we play against. Our preparation doesn t change.

Referring to a losing series in Sri Lanka last year, Du Plessis said: They beat us 2-0 in their own conditions which hurt us quite a bit.

“It s important for us to keep them under pressure to make sure they don t start the series well. If we can do that, possibly their breaking point will be a little bit sooner than it would (normally) be because of all the stuff that s happening away from the game.”

Hathurusingha told the espncricinfo.com website that a losing streak, going back to last October and culminating in two heavy Test defeats in Australia, 2has put a lot of strain on everyone”. (ALSO READ: There’s no direction for Sri Lanka cricket team: Chandika Hathurusingha)

The coach said he was shocked at the axeing of Dinesh Chandimal as captain, which happened without him being consulted, and disappointed at a lack of communication from the board before he was stripped of his own role as a tour selector.

He added that match-fixing allegations and changes in selectors and coaching staff had all had an impact.

“When the selectors changed, the leadership changed, he told the website. There was a change of coaching staff as well. And that created uncertainty.

Everything happened in public. There’s enough pressure on the players in the middle for them to concentrate on. Suddenly the players have nowhere to turn. They don’t know whom to trust or whose instructions to take.”

Hathurusingha said the players were doing their best. “They are trying. But in any high-performance environment, successful teams have direction, strong leadership and continuity.”

Dimuth Karunaratne, named as stand-in captain for the tour, acknowledged: “It s not easy when you play cricket and there is other stuff coming from the outside. The changes and everything are up to the selectors. As a team we are trying to focus on the game. (READ MORE: I don t see light at the end of this tunnel for Sri Lankan cricket: Marvan Atapattu)

Karunaratne said he would concentrate on trying to produce good performances in his role as an opening batsman. Several of his players had experience of South African conditions and his message to the team was: We must try and compete in every session.

With Sri Lanka having an inexperienced bowling line-up, Du Plessis hinted that South Africa might go into the match with six batsmen, including wicketkeeper Quinton de Kock, and five bowlers.

Du Plessis said left-arm spinner Keshav Maharaj was likely to play on a ground where spin bowling has been a factor but he liked the option of continuing with a battery of four fast bowlers following a successful recent series against Pakistan, even though he did not expect the pitch to offer much help to pace bowlers.

“If you look at a general Durban or Kingsmead wicket, it allows for a spinner. In a perfect world, when you’re playing against a subcontinent team, with the firepower we have in our seam attack, you’d like to have the option of possibly going in with four seamers, but the history tells me that you would need to go in with a spinner here,” said du Plessis.

“Our thinking is moving towards a team that has not only the option of either four-seamers or a spinner. We would like to have both options, and that only really comes into play when you have an all-rounder at No. 7. That’s our thinking moving forward, though whether it will happen tomorrow (Wednesday) I’m not sure yet,” added the South African skipper.

“Obviously you want to try and expose them with your pace, so that’s been harsh on Kesh because he’s done nothing wrong. He’s actually bowling really well. We always try to have him in the starting XI because he’s a world-class spinner. The thinking is for the Test team to move towards having both your three best seamers whoever they will be at that time on form, and then also your spinner. That’s the plan for the Test team, but whether that will happen tomorrow, that still needs to be decided,” concluded du Plessis. 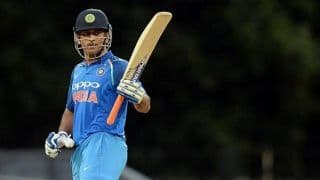