Perera scored 67 of his runs in an unbeaten 78-run last-wicket stand with Vishwa Fernando which gave his underdog team a sensational victory.

Match-winner Kusal Perera insisted “all I did was my role” after his epic 153 not out took Sri Lanka to a dramatic one-wicket victory over South Africa in the first Test at Kingsmead on Saturday.

“When I was batting with the tail, I knew we couldn’t win this match by just scoring singles,” said Perera after his career-best knock which was already being hailed as one of Test cricket’s greatest innings.

“I was the last proper batsman left. When the time felt right for me, I took my chances.”

The left-hander managed to keep most of the strike and played some audacious strokes, including two sixes off fast bowler Dale Steyn and one each off Kagiso Rabada, Duanne Olivier and Keshav Maharaj.

“I tried to hit to the closest boundary,” said Perera, who was described as “superman” by opposition skipper Faf du Plessis.

“It was a superman effort. He deserves all the accolades,” said du Plessis.

Perera added: “I had really wanted to hit two or three sixes off Steyn as we were getting close. Thankfully I was able to do that. I think my decision-making was really good.”

Perera paid tribute to Fernando who played his part in what was the highest last-wicket stand in a fourth-innings chase in the history of first-class cricket.

“I didn’t even look at the scoreboard when Vishwa came in and we had a lot of runs to get. I just tried to play it over by over and get us close, little by little. (ALSO READ:Cricket fraternity lauds unreal Kusal Janith Perera after his match-winning 153*)

“Vishwa told me: ‘I’ll hit the ball with my body, if nothing else. You do what you can.’ I took a lot of strength from that. Without any fear I took the single and gave the strike to him. He did a huge job.”

Plaudits poured in for Perera.

Dimuth Karunaratne, captaining Sri Lanka for the first time, said: “We had to believe in Kusal. It was a fantastic knock against a really good fast bowling attack.”

Karunaratne said his team had gone into the match with confidence, despite being long-odds underdogs.

Sri Lanka had been mauled in series in New Zealand and Australia and had undergone upheavals in personnel, including the sacking of previous captain Dinesh Chandimal.

“We learned lots of things on how to play on these kinds of wickets, with pace and bounce,” he said.

He also pointed to Sri Lanka’s record in Durban. On two previous tours they had a win and a draw against an 11-0 losing record on other grounds in South Africa.

“Everybody was keen to play here and to enjoy their game with clear minds to express themselves,” he said.

Sri Lanka made sure they could not lose the two-match series but Karunaratne said they would be pushing for a series win in the second Test which starts in Port Elizabeth on Thursday.

“It will not be an easy task. We have to start from zero but we are in a really good mindset now.”

“Some days you just have to say ‘well played’,” Du Plessis said at the post-match press conference.

“Even with the fielders out on the boundary he still took risks. If he’s doing that, even if you bring the field up he’ll do the same.”

Du Plessis said Perera’s innings would be talked about for years to come.

“To hit the bowlers we have for six says that all the risks he took paid off. His consistency with trying to take risks and weighing up when to do it was incredible. I think we must focus on how good that innings was. He manoeuvred the field brilliantly.”

Du Plessis acknowledged that he was likely to be criticised for his decisions.

“There will always be question marks on things that you could have done. On any other day he could have got out to one of those top edges that landed in the gaps and you would have said, ‘well bowled’.” 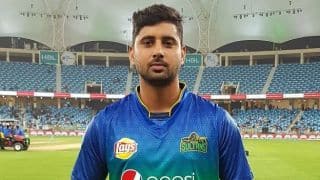 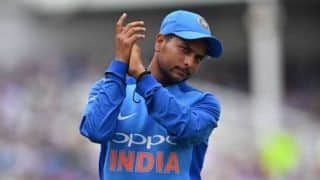 Never in my wildest dreams I thought of being part of World Cup squad: Kuldeep Yadav