Perera returned with impressive figures of three for 26 in his seven overs.

Asked to bat, South Africa, who lead the five-match series 1-0, were off to a flier with Quinton de Kock s belligerent 94 off 70 which was studded with a whopping 17 boundaries and a solitary six. QDK had himself to blame after a poor shot selection denied him a century.

South Africa were 131/1 when De Kock fell to Perera in the 21st over. Captain Faf du Plessis then shouldered the responsibility to take his side to a respectable total adding 57 to the tally before Perera returned to send du Plessis back to the pavilion. (ALSO READ: Sri Lanka aim big at 2019 ICC Cricket World Cup)

After Du Plessis s dismissal, South Africa collapsed dramatically. From 220/4, they were bundled out for 251 in 45.1 overs with Perera being the catalyst for Sri Lanka with the crucial wickets of De Kock and Du Plessis. (ALSO READ: Sri Lanka opt to bowl, Upul Tharanga left out)

Perera returned with impressive figures of three for 26 in his seven overs. Sri Lanka have a chance to level the series on a pitch that s a bit on the slower side. 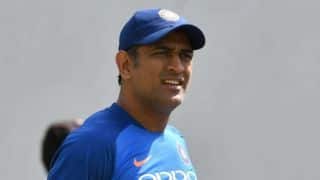