South Africa will be hoping that Aiden Markram and JP Duminy come good.

South Africa will be keen to test how the likes of Aiden Markram and JP Duminy perform in the fourth ODI as they take on Sri Lanka at the St George’s Park in Port Elizabeth on Wednesday.

Hashim Amla, who was initially recalled to the South African squad for the fourth and fifth ODI, won’t feature in the last two games after he was granted the compassionate leave on Tuesday to attend to a family illness. (ALSO READ: We can t have a mediocre batting line-up at World Cup, need to raise standards: Faf du Plessis)

Markram is making a comeback to the side following his impressive showing in the domestic 50-over tournament. He is likely to open the innings alongside Quinton de Kock, who is enjoying a fine run of form, including a hundred in South Africa’s win in the third ODI.

While South Africa can afford to do some experimentation to their batting order, with another comeback man Duminy getting a promotion, Sri Lanka’s pride is at stake after the series loss and they will like to seek a consolation win in the fourth ODI and then win the fifth and final ODI of the series as well. (ALSO READ: Injured Kusal Perera ruled out of South Africa ODIs)

Weather: Moderate to heavy showers are expected with the maximum temperature being around 22 degree Celsius.

Quinton de Kock has been South Africa s standout batsman with Faf du Plessis close second in the ODI series so far. Barring the two, none of the Proteas batsmen have set the stage on fire. South Africa have recalled Aiden Markram and JP Duminy to the side and the two are likely to make it to the playing XI. With the series won, South Africa might want to make some changes in their bowling attack as well.

Sri Lanka failed to repeat their heroics in the Test series and were outplayed in the three ODIs as South Africa clinched the series win with the two matches to spare. However, the Lasith Malinga-led side will look to seal a couple of consolation wins ahead of the 2019 ICC Cricket World Cup.

“Rain-affected games are not nice but the way we bowled up front, getting wickets, it was going to be tough for them in a full game.” – Faf du Plessis

“First half when we were bowling, we misfielded a lot. 15-20 runs too much. We got a good start 2 for 75, but after that with the DLS, it’s very hard to get that kind of target.” – Lasith Malinga 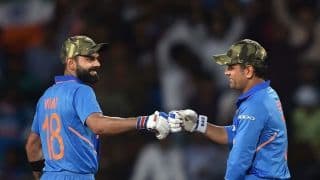