Sandakan was the pick of the bowlers, as he finished his spell with figures reading 4-0-23-4, 3rd best figures by a Sri Lankan on T20I debut.

After winning the Test series convincingly and going past the Sri Lankan side in the rain-curtailed first T20I at Centurion with a new-look side, South Africa would have hoped for another smooth ride in the second T20I at Johannesburg on Sunday. But they did not realise what was going to hit them hard in the second fixture: in perfect batting conditions after winning the toss, all Farhaan Behardien s side could manage was 113. They were bowled out 3 balls before the stipulated 20 overs. Even as Behardien fought a lone battle, his team failed to read debutant Chinaman bowler Lakshan Sandakan, who impressed all and sundry on a spectacular debut. Full Cricket Scorecard: South Africa vs Sri Lanka 2nd T20I at Johannesburg

Behardien won the toss and decided to bat first in bright, sunny and batting-friendly conditions. His assessment of the pitch said it was dry, and hence he decided to bat first: We want to look to post an imposing total here and put them under pressure, he said at the toss. But the total his side ended was nowhere near being an imposing one. South Africa went unchanged for the second T20I, a fair call after winning the first game comfortably. But Sri Lanka, yet to win a single game on this tour, were forced to make a few changes due to combination of form and fitness.

The changes, however, proved to be a blessing in disguise for Angelo Mathews. Sandakan and Isuru Udana, who replaced an injured Nuwan Pradeep and an off-colour Suranga Lakmal, wrecked havoc on the South Africans and shared 7 wickets between them. The Protean batsmen completely failed to read the two bowlers, more so Sandakan, whose Chinaman bowling proved to be a mystery for them.

Even as their batsmen were finding it tough to read him in the middle, the ones to follow were glued to the television sets in the dugout to work out his variations. After two early wickets, South Africa were trying to rebuild when Sandakan arrived and changed the complexion of the game. He removed wicketkeeper-batsman Mangaliso Mosehle (11) with the first ball of his T20I career, and then dismissed Heiho Kuhn (29) who was looking good.

Mathews made smart bowling changes and they worked for him, as three of his bowlers picked up wickets with first balls of their overs. The biggest of them all was David Miller s dismissal, who fell to Dhananjaya de Silva s innocuous off-spin. Skipper Behardien then continued to fight and played a lone hand towards the end, scoring 27 off 22 balls. But once he was dismissed, South Africa folded up quickly.

Sandakan was the pick of the bowlers, as he finished his spell with figures reading 4-0-23-4, 3rd best figures by a Sri Lankan on T20I debut. Udana, who had made his debut 8 years ago and was playing just the 8th game of his career, ended with figures of 3 for 13.

A superlative effort with the ball has given Sri Lanka a great chance of ending their losing streak on this tour and register maiden win. 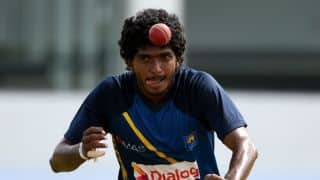 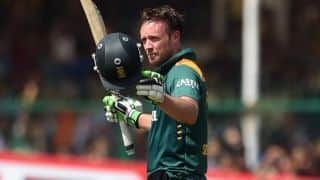