The South African performance was all about Elgar, who not only played a special innings on a track where most of his teammates struggled to get going, but also held the South African innings together.

Until recently, South Africa did not have a stable opening pair. However, it seems their worries have been put to rest by Stephen Cook and Dean Elgar. Though Cook did not score a single run on Day One of the second Test against Sri Lanka at Cape Town on Monday, the latter scored and scored aplenty. Elgar registered his sixth Test hundred, and almost single-handedly earned his side the Day One honours. He was dismissed just at the stroke of stumps on Day One for a brilliant 129 as South Africa ended Day One on 297 for 6. Quinton de Kock (68*), Faf du Plessis (38) and Hashim Amla (29) also chipped in with crucial runs.

The South African performance was all about Elgar, who not only played a special innings on a track where most of his teammates struggled to get going, but also held the South African innings together. He formed crucial partnerships: first a 66-run stand with Amla for the second wicket, then 76 with du Plessis for the fourth wicket; and finally 103 for the sixth wicket with de Kock. Even as he kept losing partners from the other end, Elgar kept going and gave his side the upper hand at Cape Town. De Kock ended the day unbeaten along with night-watchman Kyle Abbott (16*), sent in ahead of Keshav Maharaj.

Elgar was unstoppable; he collected runs by playing a wide range of shots around the ground. There were flicks off the pads, drives down the ground and through cover, elegant pulls through mid-wicket region and cuts past point. Elgar was simply a treat to watch. His innings was flawless, as there was nothing much the Lankan bowlers could do against him. Even into the nineties he did not show any signs of nervousness and got to the landmark with a thumping four. He drove a delivery from Nuwan Pradeep down the ground to bring a much-deserved hundred. Off came the helmet, and the Newlands crowd gave him was a standing ovation.

Even as he got to his hundred, Elgar knew his job was not done yet, as he continued to play solidly. From the other end, de Kock proved to be an able ally. Known for playing his shots, de Kock continued with his rich form and added vital runs with Elgar to put his side on the top. He scored his eighth Test fifty in virtually no time and also completed his 1,000 runs in Test cricket. He got to the milestone in his 15th Test and took 23 innings to achieve it, his average hovering over 52 at present.

For Sri Lanka, teenage pacer Lahiru Kumara picked up 3 wickets while Suranga Lakmal got 2 and Rangana Herath got 1 wicket. Herath s wicket was the 355th of his Test career, which put him at par with Chaminda Vaas. Of Sri Lankans, only Muttiah Muralitharan has more wickets, while Wasim Akram and Daniel Vettori are the only left-arm bowlers with more wickers.

Earlier, Angelo Mathews had won the toss and fielded first on a wicket that had plenty of grass. The fact that there was a cloud cover at Cape Town also influenced his decision. His bowlers did not disappoint him, as they made the most of the helpful conditions by bowling a tight and probing line. Lakmal removed Cook for naught as Sri Lanka built pressure early on. But Amla and Elgar saw through the difficult first hour by adding 66 runs for the second wicket.

Kumara got rid of Amla and JP Duminy in quick succession to reduce South Africa to 66 for 3. Elgar and du Plessis then guided the hosts to lunch without any further damage, lending solidity to the South African total. Du Plessis was dismissed at the stroke of tea, and Elgar and Temba Bavuma went unbeaten in the second session, before the latter fell for 10, failing once again.

Meanwhile, Aleem Dar made a world record today, officiating in his 332nd international match. He went past the existing record of 331, held by Rudi Koertzen. 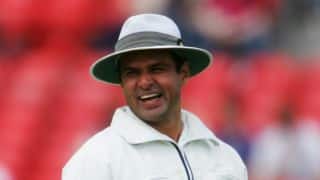 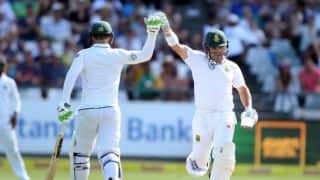