Spinner Keshav Maharaj thanked his lucky stars as well as the pitch on Friday after his record eight-wicket haul helped South Africa fight back on the opening day of the second Test against Sri Lanka. “I think it was written in the stars by God that things worked out this way,” Maharaj said after his 8-116, the best figures for a South African spinner in a first innings anywhere, in addition to his own personal record.

“I think I did get a little bit of assistance off the wicket. It is a little bit different here than in Galle, because the ball skids on. There’s a chance of getting LBWs and also the top edge when the batsman sweeps,” the left-arm spinner added.

At stumps, the hosts were 277 for nine at Colombo’s Sinhalese Sports Club Ground, giving the Proteas hope they can avoid their first series defeat to Sri Lanka since 2006 after their drubbing in the first Test in Galle. The left-arm Maharaj’s first eight-for in 22 Tests hurt Sri Lanka with regular strikes after a 116-run opening stand between Danushka Gunathilaka, who hit 57, and Dimuth Karunaratne, who made 53.

Sri Lanka, who won the first Test in Galle, had elected to bat first in their bid to clinch the two-match series. Akila Dananjaya, on 16, and Rangana Herath, on 5, hung on until the close of play. The islanders started on the right foot with Gunathilaka and Karunaratne mixing caution and aggression to keep the South African bowlers at bay on 93-0 at lunch. The left-handed duo reached their respective half-centuries just after lunch but fell to Maharaj’s guile soon after.

Maharaj, South Africa’s only regular spinner, got Karunaratne caught behind with a drifting delivery down the leg side. He got Gunathilaka in his very next over. And in the last session, he came out all guns blazing as the hosts lost six wickets with only Dhananjaya de Silva putting up some resistance with his 60-run knock.

Paceman Kagiso Rabada was the only other bowler to pick up a wicket, dismissing Roshen Silva for 22. Rabada also struck de Silva painfully on the right shoulder, but after a short break the batsman resumed his solid innings, even venturing a couple of dismissive pull shots for four when the fast bowlers pitched short. He hit eight fours in his 109-ball innings before becoming Maharaj’s sixth victim, struck in front of the stumps by a drifting and ripping delivery.

Paceman Dale Steyn though will probably have to wait for another day to get past former teammate Shaun Pollock to become the country’s leading Test wicket-taker. He is tied with Pollock on 421 wickets. The hosts, led by Suranga Lakmal, are without regular captain Dinesh Chandimal, who is suspended for the series over a ball-tampering charge. Coach Chandika Hathurusingha and manager Asanka Gurusinha have also been banned over the case.

Maharaj said though that he was not focused on personal records – not yet anyway. “Accolades mean a lot more when you can win a Test match, so hopefully in the second innings I can put in another performance and be on the winning end of it,” he said. 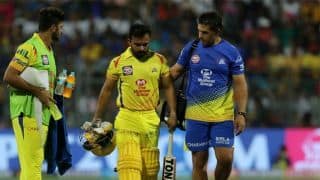